Carney Defends Obama: Not ‘Focused on the Optics and Theatrics of the Office’

Carney Defends Obama: Not ‘Focused on the Optics and Theatrics of the Office’ 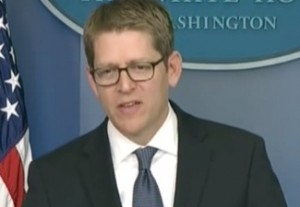 Jay Carney, CNN’s newest hire, did an introductory interview with his new network today and defended President Obama from criticisms after Obama said he didn’t anticipate the “optics” of golfing after speaking on James Foley‘s beheading.

Carney gave some insight into how the White House is preparing for Obama’s big ISIS speech tonight, and addressed questions of whether Obama’s frustrated that the Middle East is taking up so much of his time these days.

But on the question of Obama and optics, Carney was nothing but defensive of the president, who he said is just someone you can’t try to change because darn it, he is who he is:

He definitely doesn’t and never has approached the job in a way that puts a high priority or focus on optics, and I think that’s because 10 years and a few months ago if you passed him on the street, you wouldn’t have known who he was. That makes him wholly different. What that means is, he is a different kind of person than the kind of person who normally takes this office…

[H]e is never going to be the kind of president who is routinely focused on the optics and theatrics of the office. Sometimes that’s going to cause him problems and frustrate his aides. When that happens, you also have to remember it’s part of who he is.

Several commentators have already called BS on the idea that Obama doesn’t care about optics.