Carson: I’m Down in Polls Because People Go for ‘Shiny Object’ Instead of Thinking 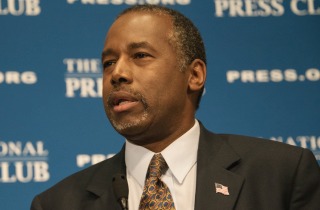 Ben Carson admitted to The Washington Post that the campaign has been “brutal” so far, but he’s still in the race because “the country is worth saving.”

He lamented how the country doesn’t really care about the truth, just the “shiny object” in the room. And in case it’s not clear who he might have been talking about there, Carson went on to say, “I would certainly prefer a more uplifting type of campaign where you really dealt more with the issues and aren’t sort of tearing other people down.”

When asked about why his poll numbers plummeted after briefly coming in second to Donald Trump, Carson said it’s because of the media narrative that a soft-spoken person like him with no foreign policy experience doesn’t have the skills to deal with national security matters. And again, look at this passage and consider who Carson could possibly be referring to:

We want to be comforted, we want to be comforted quickly, and we go for the bright, shiny object as the solution rather than being a little more cerebral. You know, if you think back to Abraham Lincoln, he was not a loud, bombastic person by any measure. Ungainly, lanky, uncouth, but very courageous and very strong.

Carson also addressed his comment at a debate about China being in Syria, admitting that was a mistake:

I said that on the basis of what some people in the CIA tell me. And of course, subsequent information came out that there is some Chinese [involvement in Syria]. But they made it seem like I’m saying there are a bunch of Chinese boots on the ground. Well, everybody knows that Chinese have physical characteristics that would make them pretty easy to identify in a setting like that.

You can read more from the interview here.