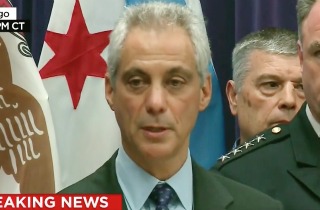 Chicago Mayor Rahm Emanuel is cutting his Cuban vacation short and returning to his city amid uproar over the latest police shooting.

This past weekend, a Chicago police officer fatally shot two people while answering a domestic disturbance call. One of the victims, 55-year-old Bettie Jones, was shot dead shortly after opening the door to let the cops inside the building.

The shooting brought a new wave of anti-police sentiment to Chicago, and it just so happened to fall in the middle of Mayor Emanuel’s vacation.

This morning, Al Sharpton appeared on MSNBC to really tear into Emanuel for not returning from vacation yet, saying he’s “never seen this kind of detachment in the years I’ve been fighting.”

And to make it sting a little more, Sharpton even said that while he and Rudy Giuliani agree on very little, he would “be on the scene and get hourly briefings” in a similar situation.

Sharpton even went so far as to say it’s the height of either insensitivity or arrogance for Emanuel not to return from vacation, and pretty clearly suggested he needs to go.

Well, it only took a few hours before Emanuel’s office said the mayor would be cutting his vacation short. According to USA Today, an Emanuel spokesperson said he’s returning immediately to “continue the ongoing work of restoring accountability and trust in the Chicago Police Department.

A few weeks ago, Emanuel got testy with Politico‘s Mike Allen for publicly revealing he would be traveling to Cuba with his family.