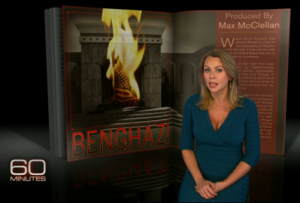 CBS News has come under fire for a 60 Minutes report on the 2012 attack on the U.S. compound in Benghazi, the main criticism centering around the changing testimony of Dylan Davies, a security contractor who was at the compound, but CBS and 60 Minutes reporter Lara Logan have adamantly defended the content of the report nonetheless.

Davies reportedly said at the time, days after the attack, that he was unable to get to the compound due to all the security, but told a rather different story to Logan. Davies, however, denied he made those comments last year and told The Daily Beast that someone may be setting him up.

“Our effort was to give our viewers a better understanding about an event in which a U.S. ambassador and three other Americans were killed,” Fager wrote. “We are proud of the reporting that went into the story and have confidence that our sources, including those who appeared on “60 Minutes,” told accurate versions of what happened that night.”

Logan also vehemently defended the report to The New York Times, saying as far as they were concerned Davies had the same story all along.

“We worked on this for a year. We killed ourselves not to allow politics into this report,” she said…

Ms. Logan said “The Embassy House,” the book written under the Morgan Jones pseudonym, along with Damien Lewis, presents a version of events consistent with what was reported on the television program. “If you read the book, you would know he never had two stories. He only had one story,” Ms. Logan said.

The only fault Logan admitted to with the report was that The Embassy House was the lack of disclosure that Davies’ book was released by the publishing arm of CBS.

You can watch the original 60 Minutes report here, via CBS News: