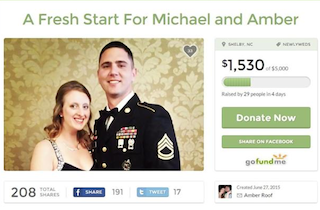 The sister of Charleston shooter Dylann Roof established a fundraising page over her canceled wedding, one that quickly disappeared after news reports about it.

Amber Roof’s wedding was scheduled for June 21, just four days after her brother assassinated nine African-American churchgoers in a white supremacist attack. On June 27, Roof wrote on her Go Fund Me page that the cancellation cost her thousands of dollars. She sought $5,000 “to cover lost wedding costs, to pay bills, and to send us on our dream honeymoon.”

However, the page was replaced by a broken link Thursday, the day the news media appears to have discovered it, as some on social media accused Roof of exploiting her brother’s attack to fund her honeymoon.

By that point, the site had raised about $1,700, one-third of the desired amount, which Roof would be allowed to keep. Roof had reportedly planned to donate 10% of the money raised to the Emanuel African Methodist Episcopal Church, the historically-black denomination her brother targeted.

Roof’s post had also criticized “the media” for ruining her nuptials. “The media abused our privacy and published all of our wedding information and destroyed our dream day,” she wrote.