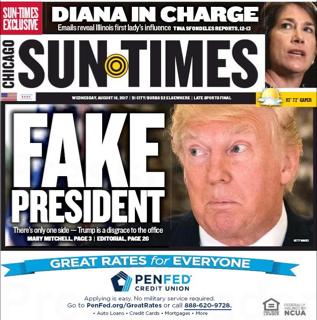 Wednesday’s copy of the Chicago Sun Times is getting a lot of attention, for putting in bold letters on their front page “Fake President” and also titling their editorial “America’s bigot in chief.”

After President Donald Trump‘s press conference yesterday, the CST staff just couldn’t take it anymore. Three people died over the weekend during alt-right/white supremacist protests in Charlottesville, but it was the President’s reaction that really got people mad. Trump said in the press conference that there is “blame on both sides” and that both groups have “very nice people.” Which has gotten lots of backlash,

Inside the paper, the CST did an opinion piece and an editorial outlining their problems with Trump. The opinion, written by Mary Mitchell, starts with “Still, in times of a domestic crisis, we expect the president to help us to remember we are all Americans. Trump just can’t do that.” It ends with “If someone shows you who they are, believe them the first time. Trump’s about Trump.” And you can pretty much guess what happens in between.

The editorial was very similar, as one would expect with a headline like “Donald Trump, America’s bigot in chief.” The editorial board starts with a call to arms, “Children, cover your ears. Decent people, speak out. Fellow Americans, do you share our sense of shame?” The piece says just when you thought Trump couldn’t embarrass the country more, he does, and that he finally went off the rails.

“Trump is to blame. He’s been welcoming haters out of their holes and into the sunlight since before he even ran for office,” the story said. “The haters who marched in Charlottesville carried photos of Trump. A better president — a better man — would have cried at the sight. This is how Donald Trump will go down in American history, as our bigot in chief.”