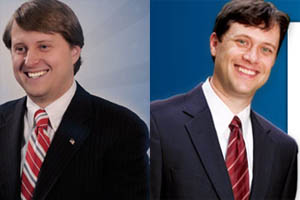 In a refreshing display of bipartisan nepotism, the AP and the New York Times ran nearly simultaneous pieces yesterday exploring the political successes of the grandchildren of the two most controversial presidents of the ’70s (sorry, Gerald Ford). New York Congressional candidate Chris Nixon Cox and Georgia State Senate candidate Jason Carter are taking up their grandfathers’ footsteps and, surprisingly, it’s Cox who seems much more willing to flaunt his pedigree on the campaign trail.

“It’s like my grandfather said in 1968, he was going to be tested in the fires of the primary,” Cox told the AP when trying to describe his own New York primary, where the local Republican Party decided to let all the primary candidates run against each other until a September 14th primary, with various Republican organizations in the area taking their pick. Meanwhile, Carter, whose grandfather has been deeply involved in the campaign, even doing door-to-door canvassing, is quick to downplay his family history– and Carter already won his election yesterday. “I read in the paper the other day that my greatest political asset was my name, but I don’t think that’s true,” he told supporters in his victory speech.

Part of this may be the fact that President Carter is still around to speak for himself and help his grandson out– a luxury which, for obvious reasons, Cox does not have. President Carter, beaming after his grandson’s election, pointed out that he, too “got started 48 years ago in a special election for the Georgia State Senate.” Cox, on the other hand, needs a bit more help reminding people that he is the grandson of a former president. His grandfather makes the first line of his “About Me” on his campaign website and is quick to roll off the tongue in media appearances.

Part of this may also be the nature of the constituencies they are trying to represent (and in Carter’s case, succeeded in wooing). New York’s First Congressional District is by nature a swing district, though– not the type of place where, as Cox claims, being the grandson of Richard Nixon would be an asset. That said, he tells the AP that “wherever we go people say that my grandfather was their favorite president.” In a swing district, it seems anything can happen. As for Carter’s Georgia district, the New York Times notes that “the Carter name is both an advantage and a potential liability in Georgia. Jimmy Carter, a one-term governor, is the only president elected from the state, but he is widely viewed as far more liberal than its current voters.” In today’s political climate, where Republicans are the opposition party and thus have a much wider field of attack, comparisons to Jimmy Carter– especially from Tea Party sympathizers– could be much more detrimental than a reference to Nixon. Carter references in the media have increased plenty since the right took to comparing Barack Obama‘s tenure to his, and Carter even made it onto one of the mysterious small-businessmen funded “Miss Me Yet?” billboards, so the name is much fresher to constituents’ minds.

That said, Having a presidential grandparent didn’t seem to hurt Jason Carter very much, and Chris Cox’s problems seem to extend far beyond his family name to the fact that his district is hotly contested on the Republican side. Given their respective reputations, the campaigns’ proximity to their family histories is strangely reversed, though the media seems to love a famiy business story enough to give both candidates’ extraordinary media coverage, anyway. After all, since when is a Georgia State Senate race worthy of the pages of the New York Times, and how often does the Associated Press go out of their way to profile a Congressional candidate running to represent the Hamptons? Apparently having a relative in the nation’s top office, no matter what the circumstances of their departure, can suddenly make your campaign much more appealing to write about.