Chris Wallace: Number Of GOP Debates Is ‘Ridiculous’ And ‘Insane’: ‘They’re All Stupid’ 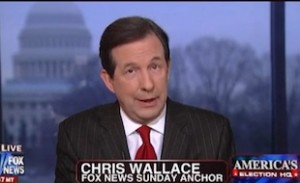 It turns out that moderating several Republican debates does not actually make one immune to thinking that there may be too many of them this time around. Fox News Sunday host Chris Wallace visited radio host Mike Gallagher to talk about Thursday’s debate, and ended up instead talking about debates generally, and how “ridiculous” the fact that there have been nineteen of them is.

Wallace told Gallagher that “it is ridiculous how many debates there have been– this is the nineteenth debate. It is insane that there have been nineteen debates!” to which Gallagher replied that the debates had become something of a reality show. Wallace noted that he had “been party” to four debates and it was difficult to come up with questions after a while, since they have already outlined their policies multiple times. The causes moderators to instead ask about personal attacks between the candidates. “I’m not saying it’s a great moment in journalism,” he clarified, “but on the other hand, they have been asked about almost everything a million times.”

After a comical exchange in which Gallagher tried to talk but Wallace complained he didn’t give him enough time, the former noted that “nobody ever booed Chris Wallace,” to which Wallace objected, joking that he was “still in therapy” for getting booed when asking Gingrich whether reports that his campaign was “a mess” were valid. Wallace then noted that, unlike himself and other moderators, CNN’s Wolf Blitzer had the State of the Union address to work with, and not discussing it was a “huge failure.”

After playing the exchange where Gingrich got feisty with Blitzer for a question about his attacks on Romney, Wallace began once again to analyze the clip before again repeating, “why on earth did they think it was good to have nineteen debates?” and later adding, before his point on Romney, that “they’re all stupid” and “people are not tuning in” to learn about policy: “it’s like you’re tuning in to a car race, you really want to see if there’s a wreck.”

The clip from the Mike Gallagher Show below: