Christine O’Donnell: AIDS Gets Too Much Gov’t Money, Condoms Wouldn’t Stop It 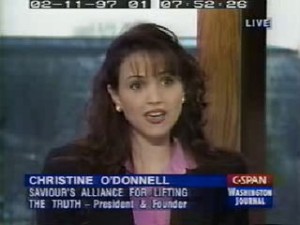 Long before Tea Party backed candidate Christine O’Donnell won the Republican primary in Delaware and became the GOP Senate nominee, the conservative firebrand was arguing that the government was spending too much money fighting AIDS and said condoms wouldn’t stop the disease from spreading.

Now TPM has unearthed a 1997 C-SPAN video that shows O’Donnell voicing concerns that a drag queen ball “celebrates the type of lifestyle which leads to the disease,” objecting to terming those with AIDS “victims” and calling AIDS a consequence of a certain “lifestyle which brings about this disease.”

After complaining that “there is a gross disproportionate allocation of funds” going to AIDS treatment and prevention in comparison to resources designated to combat heart disease, O’Donnell compared living healthier to changing the “lifestyle” that she said lead to AIDS.

“When somebody finds out that they’re at high risk for heart disease, they cut out the fatty foods, they start exercising, they quit smoking. However, our approach to AIDS, when you’re in a high risk behavior, is to eliminate the consequences so that you can continue in your lifestyle which brings about this disease,” O’Donnell said.

Referring to people who get AIDS as victims, O’Donnell said, was “the kind of spinning with words and manipulating words that empowers the bias when it comes to AIDS.”

She said that individuals could bring their chance of getting AIDS down to almost zero if they didn’t have sex outside of marriage, by having a monogamous marriage and by not using drugs that can spread HIV. O’Donnell also claimed that there was a “powerful political agenda” that was not allowing AIDS to be looked at fairly and objectively.

O’Donnell also noted on C-SPAN that while her organization, the Savior’s Alliance For Lifting The Truth (S.A.L.T.), was eligible for funding as an abstinence program under the welfare reform act, they made the decision not to accept federal funding “because we don’t want to be put under the bondage of the federal government.”

It’s not the first time O’Donnell has dipped her toe in the gay-baiting pool. During the primary, she called her opponent Rep. Mike Castle (R) ‘unmanly’ and distanced herself from a former campaign organization aide who put out a video that questioned Castle’s sexuality (even as she repeated the charges in order to distance herself).

Note – this post was written by Ryan J. Reilly and originally appeared on Talking Points Memo.