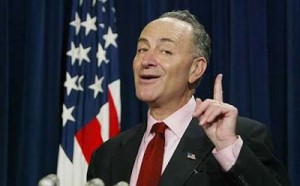 Talk about rubbing salt in the wounds, just hours after Newt Gingrich demanded his political opponents not use his own words against Republicans, Democratic Senator Chuck Schumer is proudly leading the charge to do just that. Schumer spoke with reporters earlier today and cheerfully admitted, “it was refreshing to hear such candor from a top Republican” and vowed to not miss any opportunity to remind seniors about the danger of the GOP vision for Medicare.

The Washington Post reports that in a conference call earlier today, Schumer said:

“Newt and I are considered political opposites, but I couldn’t agree more with what he said Sunday about the plan to end Medicare. . . . Gingrich was saying what everyone knows to be true: The plan is extreme. . . . What Newt seems to realize is that it would be impossible to win the White House if they embrace the Ryan plan. If Republicans make endorsing the Ryan plan the standard in the Republican primary, it will make the nominee unelectable.”

Given Newt’s own history of being a ruthlessly effective politician, he can’t really expect Democrats to miss out on exploiting this golden opportunity, can he? Although Schumer did admit that he felt bad for Gingrich, since “he’s entered the race only to find out that the Republican Party has been pushed considerably futher to the right than the party he led in the 1990’s.” By praising Newt as a moderate and labeling the Republican party as extreme, Schumer does double damage and gives some credence to the worry that what some view as Newt’s incurable blunder may continue to haunt him.