Chuck Schumer: I Try to Talk to Trump ‘About Serious Issues and He Just Changes the Subject’

Chuck Schumer: I Try to Talk to Trump ‘About Serious Issues and He Just Changes the Subject’ 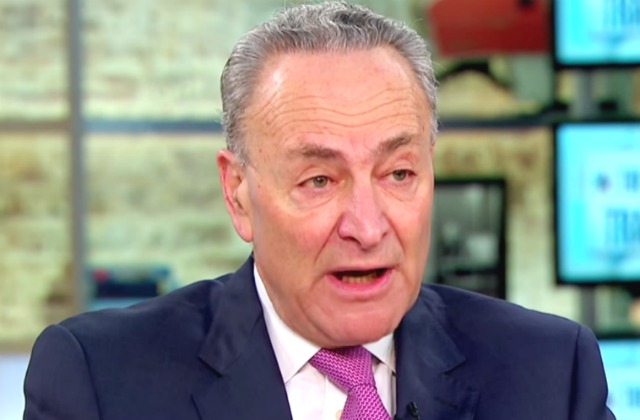 Despite only being in office for 100 days, President Donald Trump has already forged a tense and rocky relationship with Senate Minority Leader Chuck Schumer. Just days after entering the White House, Trump called Schumer out for his “fake tears” regarding the travel ban. Meanwhile, Schumer has said that Trump needs to release his taxes so they can see if he has any “Russian sources of income.”

During an interview with BuzzFeed’s Kate Nocera, Schumer mentioned that despite the harsh words the two have traded over the past few months, they are at least on speaking terms now. However, the New York lawmaker wouldn’t describe their relationship as close by any means, stating that calls from the president only come through the Capitol switchboard.

And, according to Schumer, he has a hard time keeping Trump focused when they do have a conversation:

“When I talk to him, I try to talk to him about serious issues and he just changes the subject,” Schumer said. “I told him we want to work with him where we can work with him, we want to work with him on a big infrastructure bill — America needs to rebuild its infrastructure, haven’t gotten anywhere with him. I told him on North Korea, the way to deal with North Korea is to get China to be much tougher and to get China to be tougher is for us to be tougher with China on trade. Nothing. He listens to what I have to say on the important subject of the day and then he talks about what he wants to talk about.”

When asked what Trump does want to talk about during their calls when shifting from serious issues, Schumer wouldn’t go into details, only stating that POTUS discusses “small things.”

Also, regarding Trump’s recent declaration that he thought the job of president would be easier, Schumer said that Trump’s “in the big leagues now,” and that it’ll obviously “take a lot of work” since “it’s probably the hardest job in the world.”

And then there was one point during the interview where Schumer suggested that New York Mayor Bill de Blasio should be refusing to pay for Trump’s security, saying the mayor “ought to tell the Congress if we don’t pay for it, New York City cops aren’t guarding it, and let the Feds put more people in.”