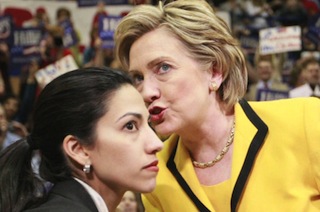 Rumors flew Monday morning that Bill and Hillary Clinton were unhappy with Anthony Weiner’s comparisons of his situation—a marriage spotlighted by sexual transgressions and public office—with the former presidential couple’s trials in the mid 1990s, and that while the Clintons supported longtime Hillary aide Huma Abedin, that sympathy did not necessarily extend to her sexting husband.

An anonymous Democratic official told the New York Post, “The Clintons are upset with the comparisons that the Weiners seem to be encouraging—that Huma is ‘standing by her man’ the way Hillary did with Bill, which is not what she in fact did…The Clintons are pissed off that Weiner’s campaign is saying that Huma is just like Hillary. How dare they compare Huma with Hillary? Hillary was the first lady. Hillary was a senator. She was secretary of state.”

“Hillary didn’t know Huma would do this whole stand-by-your-man routine, and that’s one of the reasons the Clintons are distancing themselves from all this nonsense,” the source said.

The Post also said that a top Clinton supporter was “close to going public” with criticism of Weiner, to signal that he should refrain from referencing the couple.

Meanwhile, New York Daily News reports that since the multiple sexting scandals the Clintons have no particular loyalty to Weiner, who is “like that jerky son-in-law who married in,” according to one democratic official. Another Clinton friend said the former presidential couple “care about Huma and what’s best for Huma,” with the possible implicit message that Weiner may fall into the “not best for her” category.