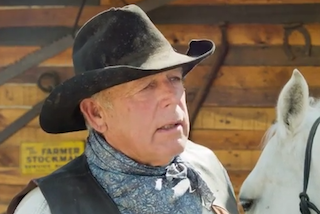 Cliven Bundy, the Nevada rancher who became famous for sharing his thoughts about “the Negro” earlier this year, has just inserted himself into the 2014 midterm elections. The one-time conservative icon appears in a new campaign ad for Kamau Bakari, an extremely long-shot candidate running for Congress in Nevada’s liberal-leaning 1st district under the Independent American Party, and just happens to be African-American.

After playing a clip of outgoing U.S. Attorney General Eric Holder, labeled “race baiter,” Bundy says that unlike those “billionaire ball team owners” who were forced to apologize for their racist remarks, he is not a “coward.”

“I know black folks have a had a hard time with slavery and you know, the government was in on it. And the government’s in on it again,” Bundy says as spaghetti western music plays in the background. “I worked my whole life without mistreating anybody. A man ought to be able to express himself without being called names.”

In turn, Bakari calls Bundy a “brave white man” who is just what America needs to “put an end to this political correctness stuff.”

Together, the two men decide to challenge Holder to come to Nevada so they can show him they are no cowards. “Mr. Eric Holder, this is one white that’s not scared to talk about race,” Bundy says. “I dare you to come to Las Vegas and talk to us.”

In case you don’t recall, it was Bundy who suggested that “the Negro” was “better off as slaves, picking cotton and having a family life and doing things.”