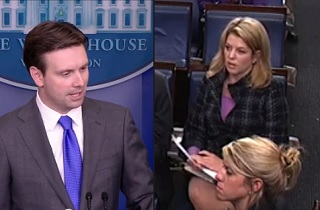 Following President Obama‘s surprise appearance in the Brady Briefing Room Thursday to discuss the Senate rule change that passed yesterday, White House Principal Deputy Press Secretary Josh Earnest briefed reporters for over an hour. The filibuster rule change was a frequent topic, as when CNN’s Brianna Keilar asked Earnest about the President’s previous opposition, as US Senator in 2005, to the so-called “nuclear option” in relation to his current support for it.

“In 2005, President Obama opposed the so-called nuclear option in favor of free and democratic debate,” Keilar said. “Some people look at his change and say that it’s hypocritical. How is it not?”

Earnest began by reading another quote from 2005.  “I think the President is entitled to an up-or-down vote that is a simple majority vote on nominations, both to his Cabinet and to the executive branch and also to the judiciary,” Earnest said, adding “That is a pretty cogent statement of the White House’s views on this topic. That also is a word-for-word statement of Senator McConnell’s views in the spring of 2005. So I do think that this is an area where there is some bipartisan agreement.”

“Just not at the same time?” cracked Jon Karl.

“The other thing that I would point out,” Earnest continued, “is that the circumstances have unfortunately changed for the worse since 2005.”

Keilar also asked if the President would like to see this rule change as “permanent or temporary?”

“What the President would like to see is an end to a circumstance where the filibuster is the go-to move in the Republican playbook,” Earnest said. “That rather than careful consideration of the nominees, the Republicans are just gumming up the works.”