CNN’s Chris Cuomo on Trump’s SNL Tweet: ‘Does the President-Elect Have to Get a Thicker Skin?’ 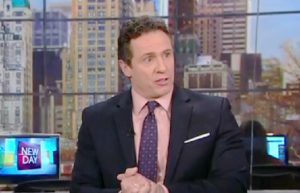 If you missed it, President-elect Donald Trump was not a big fan of Saturday Night Live’s last broadcast in which Alec Baldwin once again impersonated the incoming POTUS.

While the episode was still on the air, Trump took to Twitter to complain about how biased the show was and that Baldwin’s performance was bad. (The irony of Trump whining on Twitter about a skit portraying him as addicted to tweeting appeared lost on him.)

And this isn’t the first time Trump has complained about the show and its treatment of him. He went after them in October, launching a tweetstorm regarding a segment on the second presidential debate that featured Baldwin.

“Does the president-elect, Bill, have to get a thicker skin,” Cuomo wondered. “Do you think he knows what he’s about to enter?”

Re: Trump's SNL complaints: "Does the prez elect have to get a thicker skin?" @WJCarter: "I think he needs A skin!" https://t.co/5hQ9MLCMLg

“I think he needs a skin,” Carter exclaimed. “he doesn’t even seem to have a skin it’s so thin. If he thinks this is bad now, when he’s in office, it will be all over the place. Every comedian, everyone.”

After Carter noted that Trump himself has hosted the show, the analyst pointed out that the skit wasn’t even really a parody because SNL themselves had to point out that Trump really did the things they were mocking him for. “It wasn’t even satire,” he remarked.