CNN’s Stelter Responds to Limbaugh Accusing Him of ‘Smearing’ 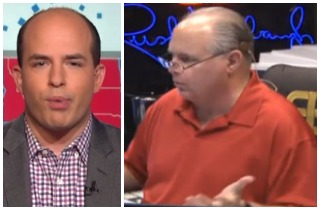 On his radio show yesterday, Rush Limbaugh accused CNN’s Brian Stelter of “smearing” him in a segment on Ebola media panic. Stelter responded online today telling Limbaugh he did no such thing.

On this week’s Reliable Sources, Stelter took on Limbaugh (who, he noted, “is not an infectious disease specialist”) for saying on his radio show that the White House believes the country doesn’t deserve to be saved from Ebola because of slavery and other things. Limbaugh shot back yesterday that Stelter took him out of context and he was simply citing one of CNN’s own guests.

Limbaugh claims he was merely going off the words of CNN guest David Quammen, who weeks ago said, of a potential travel ban, “We in America, how dare we turn our backs on Liberia, given the fact that this is a country that was founded in the 1820s, 1830s because of American slavery? We have a responsibility to stay connected with them, and help them see this through.”

Well, Stelter got wind of it and responded today. He said that it is, in fact, Limbaugh who’s misleading in denying he made that charge about the White House independent of whatever some CNN guest said. To wit:

Limbaugh never mentioned Quammen during the October 14 segment that I pulled a sound bite from. (This is the transcript.) The people he mentioned were those “at the highest levels of our government,” who, he said, have this attitude: “Well, if they have it in Africa, by God, we deserve to get it, because they’re in Africa because of us and because of slavery.”

It’s an incendiary thing to say — and Limbaugh’s been saying it over and over again. And without attributing that sentiment to someone else.

Stelter concluded that Limbaugh has clearly expressed this thought on his own, independent of whatever Quammen said, and wrote, “He should defend this thinking — not hide behind a three-week-old sound bite from a CNN guest.”

Listen to the Limbaugh audio here, via The Rush Limbaugh Show:

And you can watch the Reliable Sources segment in question here, via CNN: