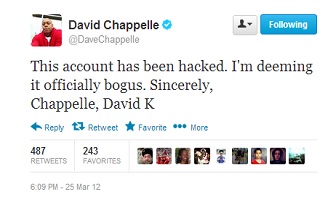 It was probably P.T. Barnum who said “Always leave them wanting more,” but legendary (and recently embattled) stand-up comic Dave Chappelle seems to have done Barnum one better: he left almost half a million people wanting more, before they even wanted it. While perusing Doug E. Fresh‘s “following” list (because that’s how you find good follows), I noticed a verified Twitter account for Dave Chappelle, and checked it out, because that’s what you do with a living legend’s Twitter feed.

It didn’t take long, as Dave’s 11 tweets read like an improv sketch about a guy not getting past his “What the f*ck is Twitter for?” moment. As near as I can tell, Dave abandoned his Twitter feed after five days, 11 tweets, and with a following in the low two figures:

@DaveChappelle 20 Mar 12 Chinese Riddle: If a man does not tweet does he exist?

@DaveChappelle 20 Mar 12 I would have put David Chappelle as my name, but it was taken. F’n impostors. This is my second tweet ever. Can I follow myself?

‏@DaveChappelle 20 Mar 12 Going to top 80 degrees here in OH today. I’ll be on my motorcycle. Man, am I edgy! I’ll post a picture of how dope I am.

@DaveChappelle 20 Mar 12 As promised- here’s a staged candid shot of me having deep thoughts whilst on my motorcycle. pic.twitter.com/LCJZmNsn

@DaveChappelle 21 Mar 12 Like I have anticipated- my following has more than doubled to eleven people. The power of visualization….

@DaveChappelle 21 Mar 12 I’m off to the gym. Replacing good character with good looks is a cornerstone of my comeback stratagem. (sarcasm)

@DaveChappelle 21 Mar 12 Does anybody read this? Let’s get to 100 followers. Shout out to the magnificent 11.

@DaveChappelle 21 Mar 12 I can’t think of anything provocative to tweet, and yet, I must continue… Must…keep….tweeting.

Then, Dave ran into an attempt by Twitter to clean up an impostor account platform that reverted his profile picture to the default, and that was all she wrote:

The account has since been verified, and although Dave was frustrated with his meager following of 11 or so, that following has grown, in his absence, to 416,387 in his absence. Sure, there are probably more than a few spambots in there, but there are also lots of real-live people like Jake Tapper, Chuck D, and did I mention Doug E. Fresh, who are waiting for Dave to come back and tweet more awesomeness like this: 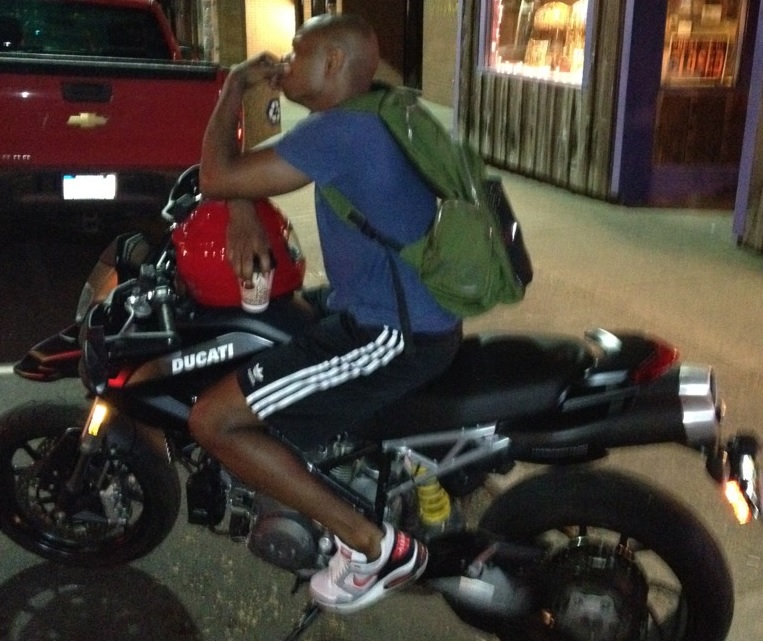 I don’t know if Dave reads Mediaite, but surely, someone who knows Dave must read Mediaite, and it is up to you to let him know that almost half a million people are watching him do nothing on Twitter. That number will blow up if he actually starts tweeting, and the best part is, he can just block anyone who demands he tweet “I’m Rick James, bitch!”