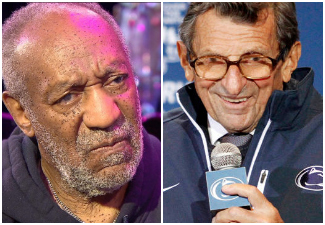 In the end, everything the old man once built vanished one by one from society.

He was once an icon, an exemplary figure, a winner like no other. But his past eventually caught up with him. No, Joe Paterno didn’t sexually assault anyone. But investigations showed he didn’t stop Jerry Sandusky–who will thankfully will be sitting within a 48-square-foot cell for the rest of his life–from molesting all of those young boys for some many years while an assistant coach at Penn State. So Sandusky went to jail while Paterno was fired after coaching there for over six decades. Penn State ended up paying about $60 million to the victims.

Paterno’s transgression–the sin of omission–led to his statue being taken down from in front of Penn State’s football stadium. His wins–111 of 409 of them–vacated by the NCAA…

“It is one of the great sorrows of my life,” Paterno said at the time, now aged well into his 80s. “I wish I had done more.”

Not long after, Paterno was diagnosed with cancer and died a sad man full of regret not too long after. His legacy? Put it this way: Ask ten people you know (who aren’t Penn State alums) what their first thought is when hearing the name Joe Paterno; the majority of answers won’t have anything to do with a football field or Navy uniforms.

Another old man, 77-year-old Bill Cosby, is feeling what Paterno did at the sunset of his career. As you know, Cosby has been accused of sexually assault by sixteen women. The court of public opinion is still split on Cosby’s guilt or innocence, at least according to reader comments in the New York Times’ Wednesday story on a possible Cosby career comeback. Per The Times:

The reader comments were split between those outraged at Mr. Cosby and those who doubted the allegations of the 15 women. The refreshingly coherent and mostly civil commenters largely debated the fairness of the justice system and whether the media is patriarchal.

These women have no reason to lie. The statute of limitations for any claims against him have long expired. No state allows claims to be brought decades later.

In the absence of a verdict, people remember only the accusations, regardless of their merit.

Do I think he used his influence to seduce young women? I don’t know, but I think that’s very likely,” replied Michelle in San Francisco, to Ike. “Casting couch-type behavior is nothing new. I think it’s vile and disgusting, but do I think it’s rape?

Unlike Paterno, who was scolded by a grand jury (correction: scolded by Former FBI Director Louis Freeh, who was hired by Penn State to look into Paterno’s handling of the Sandusky situation, and concluded that “four of the most powerful people (which includes Paterno) at Penn State failed to protect against a sexual child predator harming children for over a decade.”), the only court in session is of the pubic opinion variety. Despite the mix of opinions illustrated above, the business partners of Cosby Inc. are running from him faster than Jonathan Gruber’s client base. His current projects–a comedy special for Netflix, a new program for NBC (the former home of the Cosby Show)–are now off the table. He’s even been removed from the board of trustees at High Point University (another university where Cosby sits on the board, Temple, is keeping him onboard).

Will the actor/comedian/pitchman survive this and return in spades to the small screen? Well, Mike Tyson was once actually convicted of rape and served time, and now he’s the toast of Hollywood via the Hangover movies and HBO through a recent one-man show of his own. There isn’t a cable news show that would even think of turning down Tyson as a guest right now, as we’ve seen lately. But the former champ finished his sentence while he was still in 20s. The public mostly decided to forgive and forget. At 77, Cosby doesn’t have that kind of time.

Joe Paterno left Penn State in shame. Bill Cosby remains defiant for now–and his hiring of top celebrity litigator Martin Singer shows he ain’t going down without a fight. Sixteen accusers is just so many. And as pointed out by Bill Maher’s panel on Friday night, their stories are all so similar. But to prove guilt or innocence outside of a confession in any definitive fashion seems impossible at this point. No matter: Like everything else from the Trayvon Martin case to World Cup Soccer, this story has somehow been twisted to become a battle of left versus right on cable news and talk radio. No topic is safe from a battle between blue and red anymore. Uh…yeah…no thanks.

Even if he isn’t convicted of a crime like Paterno wasn’t, does it really matter? Perhaps that NYT commenter says it best:

“In the absence of a verdict, people remember only the accusations, regardless of their merit.”