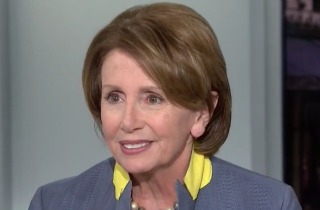 The year was 1980. The opponent was Larry Holmes. And the fight was about the saddest thing anyone could witness in sports.

There was Muhammad Ali–the greatest who ever lived–getting peppered with punch after punch from the younger, faster, coherent Holmes. As anyone and even his biggest supporters would tell you, The Lip should have never taken the fight. The Parkinson’s version of him he would morph into just a few years later was already in its early stages. He was old. His legs were gone before the opening bell. He was also broke. Again, just a sad sight of another fighter who stayed a few fights too long.

Nancy Pelosi–love her or hate her–isn’t the Ali of politics, not even remotely close. But as House Majority Leader, she knew how to raise money and rally the hardcore base. But upon becoming the first female leader in history in 2007, she simply hasn’t performed well in elections, currently winless overall under her leadership.

She is now 74. She’s served 13 terms and could serve another 13 in a district that would never vote her out. But her House allies are leaving in the form of Representatives Henry Waxman (D-CA), George Miller (D-CA) and Jim Moran (D-VA) all retiring. Even her longtime internal strategist (Jennifer Crider) has already left, taking a plush job at Microsoft early last year. When she assumed power as leader, Democrats controlled the House and Senate by fairly comfortable margins. That’s all been erased and then some under her leadership along with that of her Senate counterpart, Harry Reid.

Even many Democrats you speak now agree: When you hear Pelosi speak, it sounds so stale, so repetitive, so out-of-touch — much like Reid. Both now present an all-too-familiar face representing a different, now-defeated Democratic Party. The most recent example came when Pelosi was asked on Thursday about Jonathan Gruber and his role as a major architect of the Affordable Care Act. Remember, this is the same Gruber who was verbally referred to by Pelosi herself this way in 2009:

“We’re not finished getting all of our reports back from CBO, but we’ll have a side by side to compare. But our bill brings down rates. I don’t know if you have seen Jonathan Gruber of MIT’s analysis of what the comparison is to the status quo versus what will happen in our bill for those who seek insurance within the exchange. And our bill takes down those costs, even some now, and much less preventing the upward spiral.”

“I don’t know who he is. He didn’t help write our bill. With all due respect to your question, you have a person who wasn’t writing our bill, commenting on what was happening when we were writing our bill, who has withdrawn some of the statements.”

Except the New York Times once described Gruber, in a 2012 column titled “Academic Built Case for Mandate in Health Care Law,” this way:

“After Mr. Gruber helped the administration put together the basic principles of the proposal, the White House lent him to Capitol Hill to help Congressional staff members draft the specifics of the legislation.”

Now either Rep. Pelosi simply forgot who Gruber is (a little troubling) or got caught in a blatant lie (the more likely scenario). Either way, those aren’t exactly two fine choices of excuses to choose from.

So when in doubt, play cards! In the Democrats’ case lately, it’s either been the King of Racism or Queen of WOW (War on Women) being pulled from the bottom of the deck. With the former not applicable and the latter therefore only available, here’s what the former House Majority Leader had to say when asked the audacious question of whether she was considering retirement:

Yup — it’s a gender thing to ask if it’s time to leave. No, not because most of her House allies in California are doing the same, or because she’s proven to be ineffective if wins and losses are any indication, or, because she’s been in Congress since before Peter Doocy or Ronan Farrow were even born. Nope. It’s because she’s a woman, therefore somehow making the reporter a sexist. In a related story, that same reporter just also happens to be a woman.

Bad week for Democrats. Bad week for Harry Reid. And bad day for Pelosi, in what has amounted to a bad run as a House party leader since being sworn in over seven years ago.

Pelosi is no Ali. Nobody is. But she does have one thing in common if she decides to run for a 14th term: Sticking around way too long.