Congress May Reverse Ban On Domestic Distribution Of Propaganda Material

Congress May Reverse Ban On Domestic Distribution Of Propaganda Material 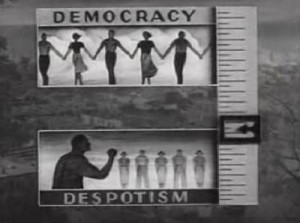 Remember the good ol’ days, when you went to the movie theaters and got to see a short propaganda reel before the main feature? Well, now our propaganda may no longer be relegated to films like Battleship, because an amendment added to a new defense bill will reverse a long-standing ban on disseminating propaganda materials in the United States. Supporters of the amendment argue that such propaganda is needed to combat propaganda being spread online by al-Qaeda.

According to Buzzfeed, if the amendment is passed, “it would give sweeping powers to the State Department and Pentagon to push television, radio, newspaper, and social media onto the U.S. public.” What exactly is the bill trying to accomplish?

The tweak to the bill would essentially neutralize two previous acts—the Smith-Mundt Act of 1948 and Foreign Relations Authorization Act in 1987—that had been passed to protect U.S. audiences from our own government’s misinformation campaigns.

The bi-partisan amendment is sponsored by Rep. Mark Thornberry from Texas and Rep. Adam Smith from Washington State.

In a little noticed press release earlier in the week — buried beneath the other high-profile issues in the $642 billion defense bill, including indefinite detention and a prohibition on gay marriage at military installations — Thornberry warned that in the Internet age, the current law “ties the hands of America’s diplomatic officials, military, and others by inhibiting our ability to effectively communicate in a credible way.”

The military has been trying to find new avenues for spread U.S. propaganda on social media websites for a while now. A 2011 Wired piece details how the Department of Defense has been working on ways to monitor and engage in “countermessaging” on social media sites like Twitter.