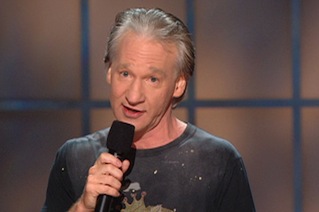 In a recent stand-up performance, Bill Maher made a crack about Trig Palin, Sarah Palin’s special needs child. He got heard—first by a conservative writer, and then by Sarah Palin herself.

Ron Futrell, a former sportscaster and contributor for Breitbart, says Maher referred to Palin’s youngest child Trig as “retarded.” Futrell has a special needs child himself, and has interviewed Palin in the past about their shared challenges. He was appalled, not only at Maher’s word choice, but the audience’s uproarious reaction.

Futrell later began heckling the comic over a Halliburton reference:

I was in the back of the room with friends (who got me my ticket and asked me to go – so no, I didn’t pay) and moved closer to the stage, but was still sitting a good ways back. At that point, Maher made a joke about Halliburton (you remember Halliburton, don’t you? Think way back to a decade ago) and still disgusted, I blurted out, “It’s 2013 Bill, you might want to update your material.” That was as much a comment on him using the “R” word as it was about him using old material. Supposed “progressives” are apparently comfortable living back in the day when the “R” word was used regularly on those with special needs. Maher heard me and responded back. Security approached me and asked me to be quiet—I gladly left The Pearl at The Palms. If they want to call it “kicked out,” I’ll go with that and wear it proudly, kicked out after I spoke up because I don’t like anybody treating people with special needs as targets.

Futrell’s post on his evening got the attention of Palin, who took to Twitter to give “Little Bill” a piece of her mind: 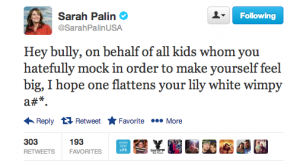 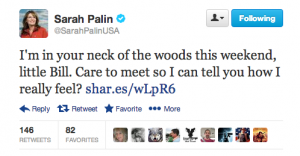