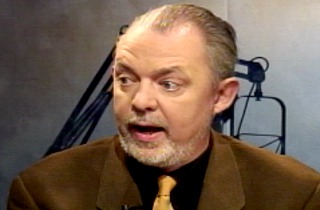 The media analyst and proprietor of the widely read “Tyndall Report,” Andrew Tyndall, published a piece in The Hollywood Reporter last week in which he took a stab at assessing the logic behind CNN’s decision to devote almost one month to nearly 24-hour coverage of the missing Malaysian passenger airliner.

In that post, he stumbled across a pervasive myth about cable news, and political media in general. Namely, that the left-leaning press has a virtual monopoly on policy “wonks” and is motivated by a dispassionate search for the truth rather than a devotion to ideological rigidity.

“Zucker’s CNN,” Tyndall wrote, “in its quest to triangulate newsgathering away from the political wonkishness of MSNBC and the ideological-message discipline of Fox News, runs the risk of exiting the realm of journalism for the pseudo-fictions of reality TV.”

At its core, this is not a debatable assertion -– it is just factually inaccurate.

RELATED: MSNBC Had More Negative Coverage Of Romney Than Fox News Did Of Obama, Says Pew

When it comes to “ideological message discipline,” MSNBC long ago surpassed its chief cable news rival. Following the end of the 2012 election cycle, a Pew Research Center study revealed that MSNBC ran 23 negative stories about Mitt Romney to every one positive story. 71 percent of MSNBC’s coverage of the GOP presidential candidate was negative, compared to 46 percent of Fox’s coverage of President Obama, or an 8-to-1 ratio of negative to positive stories. 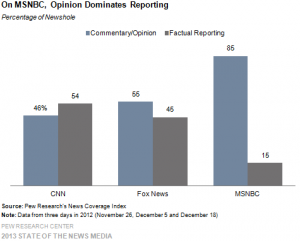 A subsequent Pew study in March of 2013 revealed that a full 85 percent of MSNBC’s post-election programming was devoted to political commentary and opinion versus “factual reporting.” While a majority of Fox’s programming was also devoted to opinion journalism, the ratio was much narrower (55 to 45 percent).

An extensive report from March of this year in the Columbia Journalism Review that Fox has made it part of their business model to feature liberal guests (though often outnumbered) right alongside their conservative counterparts whereas MSNBC’s conservative targets are more often tried in absentia. “While the liberal hosts of MSNBC often skewer conservatives, the debates happen with villains who are not in the studio: lambasted, by proxy, in news clips,” wrote CJR’s assistant editor Alexis Sobel Fitts. “At Fox, they happen in person, with a real-live liberal who is often on staff.”

MSNBC’s empirically observable dedication to ideological reporting is, in fact, merely reflective of the preferences of the audience they are trying to court: partisan Democratic voters. A CBS News/New York Times poll from February showed that Republican voters, on issues ranging from same-sex marriage, to climate change, to abortion rights, to the minimum wage, are more flexible than traditional Democratic voters.

While this condition may be deleterious to the health of the republic, it is not hard to see it was a natural business decision for MSNBC to make. As evidenced by the high profile incident involving the ouster of Mozilla CEO Brendan Eich following the discovery of his 6-year-old donation to a group supporting California’s Prop 8, which stipulated that marriage exists only between a man and a women, ideological rigidity has become new virtue of the left. This is only the most recent and highest profile ousting of a prominent but private individual who held personal political convictions which are anathema to the left.

For many of MSNBC’s loyal viewers, a legitimate opposition simply does not exist. Therefore, ostracizing those who do not conform to the ideological mold is not only justifiable but a moral imperative.

But while Tyndall was demonstrably wrong in his assertion that MSNBC is somehow more devoted to the “wonk” arts than the supposed ideological enforcers at Fox, he did embrace a prevalent myth about conservative media: it suffers from a perceived “wonk” gap when compared with its liberal competitors.

Proof of this circumstance can be seen in the explosion of field of “explanatory journalism.” Former WonkBlogger, Ezra Klein, perfected this style of reporting during his tenure at The Washington Post and has taken his expertise to the new online venture, Vox Media. A quick perusal of their homepage reveals a sound strategy; provide marginal political news consumers with a variety of introductions to subjects on which they either want to or think they should be conversant.

Today’s offerings include topics ranging from how George W. Bush’s foreign policy explains the brutal realpolitik in the HBO drama Game of Thrones to “Republicans’ plan to cut Medicaid, explained.” For audience retention sake, they’ll throw in the occasional morsel of candy. “11 board games you should be playing as an adult,” fits that bill.

This ground floor competency in a variety of subjects requires no great expertise on the part of the reporter, but insert a handful of graphs with relevant data points and one or two supporting quotes and the work of the “explanatory journalist” is dubbed authoritative.

This is a powerfully successful journalistic model in the evolving media environment. It provides news consumers with exactly what they want – that is, to be blunt, rhetorical ammunition to use when they engage their ideological adversaries (friends, family, and co-workers) at the dinner table or during happy hour. It is a fair critique of conservative media that there is nothing like this on their side, particularly given how easily it can be reproduced.

But it is not a fair critique of conservative media to suggest that they lack “political wonkishness,” as Tyndall put it. Policy mavens like The Washington Examiner’s Byron York, the American Enterprise Institute’s James Pethokoukis, CNBC’s Larry Kudlow, R Street Institute’s Reihan Salam, Heritage Foundation’s Hans von Spakovsky, Manhattan Insitute’s Avik Roy and a slew of other conservative thinkers are already prominent fixtures in political media (radio, television, and print). That is to say nothing of the myriad capable conservative columnists and reporters who possess broad expertise on an array of issues.

The perception that conservative media lacks a focus on serious policy issues is widespread. While it is not accurate, it is understandable why some might hold this view. But judging from the phenomenon of modern “explanatory journalism,” it is not because conservative policy wonks talk down to their audience. It is because they do not.