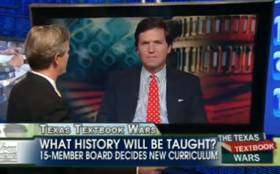 It isn’t the first time a Fox News commentator has taken on the public education system’s assumed liberal bias, but months after the initial release of the Barack Obama indoctrination videos from New Jersey that followed the President’s address to schoolchildren last fall, the gears have shifted from the White House to the nature of public education itself. Nearly a week after Glenn Beck‘s special on the “progressive assault” on children in schools that ended with a plea to parents to get children removed from the public school system, Tucker Carlson followed up on a topic long of interest to him, the distortion of facts in public school textbooks, and in the process mocked opponents of McCarthyism. And while the attack continues, the left responds meekly.

The battleground this time for what children get to learn is Texas, where a Republican-led education board is expressing concerns over the content of their textbooks. The board is requesting several edits to the books, which, according to Carlson, has liberals “furious that there may be a reduction in the level of left-wing propaganda in textbooks.”

Carlson then proceeds to explain the issues conservatives have with the textbooks, distributed to 47 states: the inclusion in textbooks of “minor-league” farmers’ activists at the detriment of, say, the fact that “communists actually did infiltrate the United States government after the Second World War. McCarthy may have been a demagogue, but he was right to that extent.” He mocked the outraged reactions of the more liberal members of the board, and although it may not seem like promoting McCarthyism is a good way to get independents on board with the child indoctrination theory, so far it’s been working.

Not that those left of center have remained silent while home schooling proponents bash the alleged indoctrination the government is sponsoring. The AP reported concerns by parents about textbooks used in home schooling that openly contradict evolution in favor of creationism without adequately teaching the former. The press attention on the textbook battle has mostly centered on the right, however, with little noise coming from liberal cable news pundits about the increasingly loud push for semi-auto-didactic learning (with parents) from conservatives. With “the children” being one of the most important abstract issues Americans care about today, it is strange that liberals haven’t embraced the narrative that homeschooling is laden with pitfalls in the same way that conservatives argue the opposite about public school, and it may hurt them in the end if the conservative commentators on Fox (who also interviewed a conservative Texas parent this morning) continue to emphasize the point.

Carlson’s interview on Fox and Friends below: