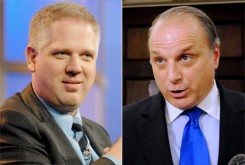 With any luck, and to the great relief of everyone but David Paterson, Eric Massa will have wound his way out of the news cycle by the end of the day, likely never to be heard from again (or one hopes, at least…except perhaps in passing ‘tickle fight’ references). In the meantime there is the a bit of a clean-up job that needs to be done by Glenn Beck. Something which he got started on during his radio show this morning, in what could be called ‘Ridicule Massa Wednesday.’

“Can we officially call yesterday tickle fight Tuesday?” asked Glenn Beck, before expressing his amazement over Massa’s revelation that he’d had a tickle pile on with five grown men at his 50th birthday party. “I think there are people that could understand that….Michael Jackson comes to mind.” And on a (slightly) more serious note: “I think we know who he [Massa] is…someone who can’t be trusted to tell the truth about his life.”

Interestingly, Beck also expressed some doubt that the problem was that the Dems ‘got to’ Massa. “It’s a possibility, but not one I’m going to go on because there’s nothing there.”

At one point, Beck almost admits (likely to the surprise of no one watching yesterday) that he almost “threw [Massa] out of the studio three time, but I thought I’m not going to be that hot head kind of guy.” He also notes that he’s torn over whether it was a good decision, repeating that it was a waste of time, “but now we never have to talk about this man again.” Until 5pm tonight probably. But after that I suspect we’re home free. Audio below.