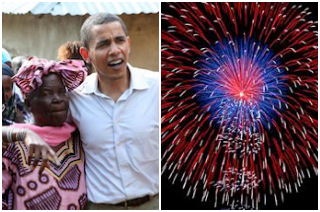 It must be cumbersome to celebrate America while maintaining pure disdain for the guy elected to lead it, but Fox News Online found a way. “Obama Spends $100M on African Trip But Cancels Marines’ July 4th Fireworks,” blared the site’s headline on Thursday, a lede that quickly went viral in the conservative Twittersphere. And just like that, waving the flag became an easy protest of Obama’s anti-military overseas spend-a-thon.

Budget cuts forced the cancellation of Fourth of July celebrations at Camp Lejeune Marine Corps Base and Fort Bragg Army Base in North Carolina, and the Marine Corps Logistics Base in Albany, Georgia.

Tellingly, the actual article—which was aggregated from MSN and affixed by Fox with a more risible headline—failed to back up the causation implied by Fox’s rebranding of it, instead properly ascribing the cutbacks to the sequester, which triggered about $85 billion in spending reductions after Congress failed to come to a budget agreement earlier this year. The cuts targeted the military so as to encourage Congress to prevent them, which the august body failed to do.

The sequester also did not specifically direct how the cuts were to be made, leaving individual base commanders with the decision as to how best to apportion budget reductions. “The notion that Obama…reached down into the budget of individual military bases to cut single line items is absurd,” is how Alex Seitz-Wald put it in Salon.

This all has zip to do with Obama’s Africa trip, except that the two occurred at roughly the same time, so they’re connected in that “butterfly flaps its wings” sorta way. For that matter, Obama opposed the sequester, which happened at the insistence of House Republicans safely ensconced in gerrymandered districts, and for whom spending cuts are something that happens to abstracted “takers” rather than very real military personnel.

Further, the $100 million price tag much touted in the conservative media is the high end of an unofficial estimate from the Washington Post, which based the projection “on the costs of similar African trips in recent years”—in other words, in line with what Bush and Clinton spent on their trips. Of course, this hasn’t stopped the conservative media from repeating the $100 million figure as evidence of Obama’s profligate ways.

But if going one barbecue without seething about Obama’s Socialist caliphate gives you the bends, this ought to hold you until the Zimmerman trial resumes tomorrow.