Could Marijuana Legalization Be The Dem’s “Hope And Change” Of 2012? 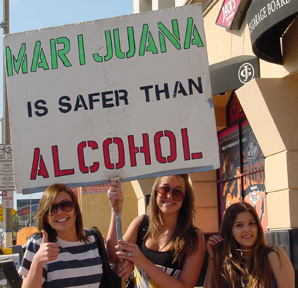 In the 2008 election, the Democrats had an enormous surge of support from voters who would normally never be seen in a polling booth. A general unhappiness with the Republican rule of the previous eight years, matched with the fears of the burgeoning recession and (most importantly) the ability to actually vote in America’s first black president made people feel like they were part of something truly important. Now that the 2010 and 2012 elections are coming up fast, the left is looking for another big social event to pull in those fair-weather Democrats again and Ryan Grim, writing for the Huffington Post, thinks he may have found it in marijuana legalization.

The clearest comparison that Grim uses is to Karl Rove’s use of the scary gay marriage boogeyman to drive conservative turnout in 2004. He theorizes that, with legalization on the ballot, polling stations could fill up with marijuana proponents who vote down the left side of the ballot whether or not the Democratic candidates they’re voting for even support legalization to begin with.

“In California, Democrats hope the state’s legalization initiative will drive turnout and help send Barbara Boxer back to the Senate and Jerry Brown to the governor’s mansion, even though both have taken positions against the measure. Because Democrats have yet to coalesce around reform of marijuana laws, the effort to link pot to the party’s electoral hopes is going on quietly, the opposite of Rove’s coordinated campaign with religious groups opposed to marriage rights for all Americans. A recent survey has California’s marijuana initiative up 56-42, though proponents worry about the threat of major spending in opposition from the prison guards union, alcohol interests and pharmaceutical companies.

Nevada, a swing state, has twice rejected pot legalization initiatives in the past, though support increased to 44 percent in 2004, the last time it was on the ballot. Supporters plan to put it on again in 2012. Whether it can pass isn’t some Democrats’ top concern: As long as it can get unlikely voters to a polling station they’d otherwise avoid, it’s a success.

Activists are also looking at several other states, including Oregon, Illinois, Maine and Massachusetts, the last of which greatly liberalized its pot laws through a 2008 ballot measure. Illinois and Massachusetts are unlikely to be competitive at the presidential level, but having pot on the ballot could help with House races or assist in unseating Scott Brown in 2012.”

Grim ends his article by pointing out that it’s a little unlikely that legalization would ever be used as thoroughly and successfully as the Republicans used gay marriage. That’s true. Six years ago you couldn’t turn on a single conservative radio or television show without being inundated with the ridiculous idea that any candidate with the letter “D” next to their name was secretly plotting to fill our nation’s schools with an evil homosexual cabal whose only goal was to gay marry your children. It’s hard to imagine the Democrats ever getting that organized let alone getting that organized around pot. Still though, it may add fire to Grim’s post to point out that MSNBC had some bit of viral success by bringing on Fire Dog Lake’s Jane Hamsher to promote legalizing the drug. If MSNBC starts developing reefer madness, could the rest of the liberal media start following behind?

However, there’s one other problem with Grim’s thesis. This is not the 60s anymore and liberal hippies and professors aren’t the only ones who are angling to get weed legalized and taxed. Just ask John Stossel. Sure he’s got some groovy facial hair, but he might be a sign that marijuana won’t just be bringing the lefties into the polls.