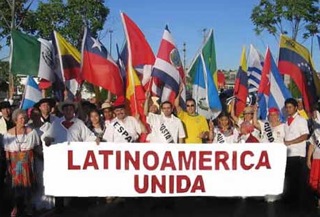 The ‘Tea Party’ as we now know it has become the major driving force for conservatives in this decade, exhibiting major power to engage people politically and get out the vote. Thus it isn’t shocking that many are attempting to harness some of that energy, but the latest spin-off of the Tea Party– a Latino-centric get out the vote effort named the “Tequila Party”– highlights a serious misconception in the media of Latin Americans as a monolithic group with similar political leanings and concerns.

The “Tequila Party,” CNN reports, is a group organized by Cuban-Americans Augustin “Gus” Garcia and Belinda Garcia-Blase to get out the vote in the Latino community. “It’s more about registering to vote and then voting than supporting particular candidates,” CNN reports, noting that their first event, scheduled for June 4 in Arizona, deliberately omits references to any particular politician and instead aims to “impact the 2012 elections.” Garcia notes that the choice of “Tequila” as the name for the group was a decision based on the fact that Latin Americans are “a culture that likes humor” and “are not Puritans.” “You have to laugh because there is no logic in racism,” Garcia told CNN, noting that Latin Americans are “united by culture and language.” Garcia-Blase echoed these sentiments, adding that “Latins are the neighbor next door that brings global society.”

The entire piece on the Tequila Party is a hefty bundle of fodder for cultural criticism in its own right, but the above summary captures most of the egregiously problematic language. The simplest way to begin is by pointing out that Tequila is an almost exclusively Mexican drink (due to Spanish imperialism, the Philippines had a hand in its development as well)– thus not ideal to represent the entire continent of South America, of which Mexico is not a part, nor any nation of the West Indies. Then there’s the generalization that Latin Americans are “a culture that likes humor,” which whittles down the role of about 600 million people to court jesters, just standing around ready to make the rest of the world laugh. It is also worthy of note that equating an entire culture with an alcoholic drink is the sort of ethnically insensitive generalization that, if made by anyone who isn’t Latin American, would cause an uproar. Furthermore, while technically correct in calling Latin Americans “not Puritans,” the continent has a rich Catholic tradition that serves to undermine the claim that socially conservative values are not taken seriously in the region. Then again, if the initial premise is that Latinos are “humorous,” the conclusion that they don’t take anything seriously comes naturally.

Perhaps most emblematic of the recurring problem the media has had with understanding the dynamics of the Latin American community is Garcia’s assertion that all of Latin America has “a culture and language.” Even excluding the fact that Brazilians speak Portuguese, the differences in regional dialects are so vast that it is often said that Argentine Spanish is unintelligible to, say, a Mexican native and vice versa. Racially, Latin America is as diverse as the United States or more– for example, 55% of Mexican Americans identify as white, while 2% identify as indigenous, and less than 0% as black. Cuban Americans, in turn, identify as 90% white, 5% black, and less than 0% indigenous. The black populace is highest among Dominican Americans at 14%. And the cultural differences, particularly in America, are so stark that finding any issue that cuts across the entire spectrum of the Latino population is nearly impossible.

As per the 2010 US Census, three nationalities make up more than 75% of the Latin American population in America: Mexican Americans (63%), Puerto Ricans (9.2%) and Cuban Americans (3.5%). 7.9% hail from Central America and 5.5% from South America, with Guatemalans, Salvadorians, Ecuadorians and Colombians making up the top nationalities in both categories. While language may generally be considered a binding link between these nationalities, their political interests are significantly impacted by their histories in America, and are far too disparate from which to cull a definitive voting block. Take, for instance, education. The U.S. Census reports only 13% of Latinos have college degrees, but this average ignores major disparities among nationalities. Only 6% of Mexican Americans graduate from college as per 2000 Census data; 20% of Cuban Americans do. The other large Latino group in America, Puerto Ricans, come in at 10%. A constituency with a 20% college graduation rate is going to have different political concerns than one with only a 6% graduation rate, and averaging the two out does nothing to address the specific issues of each community. The high school graduation rates are even more disparate: 69% of Cuban Americans graduate high school to 49% of Mexican Americans.

But education is not the topic most commonly considered a significant policy issue in the Latin American community. An analysis of coverage of Latinos on cable news (CNN, MSNBC, Fox News, and Fox Business) in May shows that, of the 51 references to Latinos on television (eight of which were about Mexicans, one about Puerto Ricans), 62% of that coverage discussed immigration. Given that, by nature, many Latinos had to emigrate to come to America, immigration is certainly an important issue and will have an impact on the 2012 elections. Yet linking immigration so strongly to Latinos ignores the fact that, for most Latinos, amnesty for illegal immigrants is not a topic that appears on their radar. Of the three largest Latino groups, two are legally incapable of it. Puerto Ricans are natural-born American citizens, while Cubans who touch American soil– no matter how they arrive there– are given political amnesty. And given the proximity of Mexico to the United States, a significant chunk of that population is American-born, particularly in the Southwest regions that were once part of Mexico. That leaves a far smaller number of Latin Americans directly impacted by immigration reform than statistics that treat Latinos as one ethnic group indicate.

As America’s Latino population increases and their presence in the political sphere becomes more pronounced, those who cover American politics are sure to hit more and more roadblocks should the continue to treat Latinos as a monolithic group. Just as the political interests of, say, Egyptians have little in common with those of Rwandans, so too do the political interests of Chileans align little with those of Dominicans, and the media should adapt accordingly as populations assimilate and develop. The regression in sociological thought presented by coverage of confused-identity groups such as the Tequila Party only serve to expose the symptoms of a media evolving at a far slower pace than the groups they intend to cover.