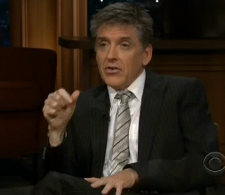 Craig Ferguson of CBS’ Late Late Show isn’t shy about experimenting with the late-night format, with his pre-monologue monologues (which often include puppets), and lack of a band. The show he did last night, however, was a radical departure even for him. Inspired by Tom Snyder, the first Late Late Show host, Ferguson did a show with no audience, instead talking to Stephen Fry for the full hour.

Ferguson said having such an interesting guest was “protection” for him (another possible description: “smart”), but even so, Ferguson performed as well as could be expected working in a format with which he was unfamiliar, and further staked out his place as one of television’s most versatile talents.

The two just went back and forth, talking about whatever they felt like – their upbringing, past demons, Hugh Laurie, America (Ferguson became a U.S. citizen in 2008 and, awesomely, has this tattooed on his forearm), and perhaps most interestingly, technology. Fry discussed being the second person in Europe to own a Mac (the first: Hitchhiker’s Guide to the Galaxy author Douglas Adams). They talked Twitter (Ferguson recently joined, while Fry is a longtime user), with Ferguson saying it was his “idea of a good and open mind” to “embrace a new idea.” Fry earned extra Twitter points by name-dropping co-founder Biz Stone via a play on words (watch the video and it will make sense). They even discussed trolling, with Ferguson expressing amazement that he even found vile comments under a Youtube video of late comedian Soupy Sales (“How can you hate Soupy Sales?”), but with Fry concluding that today’s “open society” is an “incredibly good thing.” It was a thoughtful, entertaining discussion – one that wouldn’t be possible under the normal talk show format.

Tonight, Ferguson will go back to business as usual, but based on the widely glowing reviews of last night’s show, he might be wise to try this format again. Ferguson already appeared to be the best interviewer in late night comedy before last night, but now there’s no question. He proved he can successfully do an entirely different kind of show than his competitors would feel comfortable putting on, and it’s one more reason that, whenever David Letterman steps aside, Ferguson deserves the show with one less “Late” in the title.