Cruz Releases Another Machine Gun Video; This One Thanks to Rachel Maddow
video

Cruz Releases Another Machine Gun Video; This One Thanks to Rachel Maddow 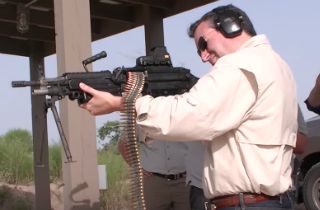 Ted Cruz made a video with IJReview in which he makes “machine gun bacon,” combining two of America’s greatest loves: weapons and bacon.

Well, Rachel Maddow had to go and ruin the fun last night by fact-checking Cruz, and explained that it was not, in fact, a machine gun, but just an AR-15. She said it’s “kind of obvious” he wasn’t holding a machine gun.

Well, Cruz responded on Twitter today, complete with a video of him shooting an actual machine gun:

@tedcruz Thanks for the reply, Senator! Neat video. But the question still is, why did you call the AR-15 a “machine gun” when it’s not one?

You can watch Maddow’s segment here, via MSNBC: