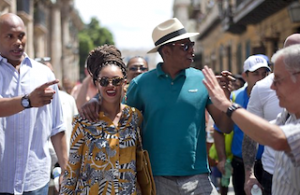 Jay-Z and Beyoncé caused quite a stir this week, as can be seen in the video below, by celebrating their 5th wedding anniversary with a surprise trip to Havana, Cuba. And now, some Cuban-American members of Congress are formally questioning the legality of their trip.

Rep. Ileana Ros-Lehtinen and Rep. Mario Diaz-Balart, both Republicans from Florida of Cuban descent, sent the letter below to Adam Szubin, director of the Office of Foreign Assets Control at the Treasury Department. In it, the two congresspeople “express concern” and “request information” regarding the trip, given the fact that since the 1960’s there has been an embargo on American tourism to Cuba.

We write to express concern and to request information regarding the highly publicized trip by U.S. musicians Beyoncé Knowles-Carter (Beyoncé) and Shawn Carter (Jay-Z) to Cuba. We would like to respectfully request, within all applicable rules and guidelines, information regarding the type of license that Beyoncé and Jay-Z received, for what purpose, and who approved such travel.

As you know, U.S. law expressly prohibits the licensing of financial transactions for “tourist activities” in Cuba (Section 910(b)(1) of the Trade Sanctions Reform and Export Enhancement Act). If these individuals were given people-to-people licenses, we would like to bring to your attention the Cuba Travel Advisory issued by OFAC on July 25, 2011 which states, “OFAC only licenses People-to-People Groups that certify that all participants will have a full-time schedule of educational exchange activities that will result in meaningful interaction between the travelers and individuals in Cuba.” These restrictions are in place because the Cuban dictatorship is one of four U.S.-designated state sponsors of terrorism with one of the world’s most egregious human rights records. Cuba’s tourism industry is wholly state-controlled; therefore, U.S. dollars spent on Cuban tourism directly fund the machinery of oppression that brutally represses the Cuban people.

Despite the clear prohibition against tourism in Cuba, numerous press reports described the couple’s trip as tourism, and the Castro regime touted it as such in its propaganda. We represent a community of many who have been deeply and personally harmed by the Castro regime’s atrocities, including former political prisoners and the families of murdered innocents. The restrictions on tourism travel are common-sense measures meant to prevent U.S. dollars from supporting a murderous regime that opposes U.S. security interests at every turn and which ruthlessly suppresses the most basic liberties of speech, assembly, and belief. We support the Cuban people by refusing to sustain their jailers.

Thank you very much for your assistance in this important matter and look forward to your response.