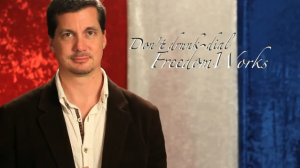 Perhaps you all remember the story of Lance Baxter AKA D.C. Douglas AKA the guy who used to say “fifteen minutes could save you fifteen percent or more on car insurance” in Geico commercials. We say “used to” because, a few weeks ago, he got fired for calling the Tea Party group FreedomWorks and asking how many of their members were “mentally retarded.” Well, he’s responded to his critics with a lengthy comedic “PSA” attacking FreedomWorks, the Tea Party, Fox News, Megyn Kelly, Pat Robertson, and more. Apparently it only takes a video of five minutes to get 100% of your hostility out.

The video serves as a “public service announcement” in which Douglas imparts the wisdom he’s learned to fellow Tea Party critics; don’t drunk dial FreedomWorks. Instead call them sober to attack them on a number of different points.

While the video does get a few good points out, it probably won’t do much to help Douglas’ cause. Had he simply admitted he made a mistake and then listed his critiques of the organization, he might have seemed sympathetic. Instead, his pot shots come off as overly bitter. To make things clear, this writer enjoys satire, but it works much better when your jokes are cleverer than a random shot of Douglas rubbing his nipples. While there are a couple of good arguments in the mix here, the overall video isn’t going to bring anyone to Douglas’ side and will probably end up doing the opposite.

Also, can we stop the trend of giving out your enemies’ phone numbers and goosing random internet crazies into harassing them?