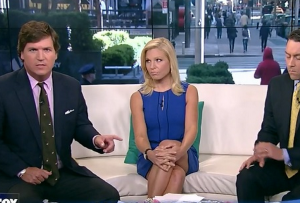 Blogger Mickey Kaus quit his job at The Daily Caller today because, as he explains, he wrote a piece critical of Fox News that Tucker Carlson––Daily Caller editor-in-chief and Fox News contributor––ended up pulling.

Kaus explained to Politico that he wrote a column about how Fox News is being negligent in covering the immigration debate. He said, “[They’re] filling up the airwaves with reports on ISIS and terrorism, and not fulfilling their responsibility of being the opposition on amnesty and immigration.”

After it was posted, Kaus says Carlson told him, “We can’t trash Fox on the site. I work there.” And this is how the conversation unfolded, he recalls:

“He said it was a rule, and he wouldn’t be able to change that rule. So I told him I quit,” Kaus explained. “I just don’t see how you can put out a publication with that kind of giant no-go area. It’s not like we’re owned by Joe’s Muffler Shop, so we just can’t write about Joe’s Muffler shop.”

Carlson told Politico, “Mickey is a great guy, and one of the few truly independent thinkers anywhere. I’m sorry to see him go.”

A cached version of Kaus’ column is still accessible, and it’s quite a lengthy examination of how Fox has largely overlooked the immigration debate, calling out Megyn Kelly in particular.

For example, he put together a list of the lead stories on The Kelly File since the beginning of the year. Here’s half of it:

1/20 –State of the Union/Terror. (Obama veto threat over immigration is mentioned)

1/21 — Iran (Later in the show, Gov. Perry is interviewed and immigration is discussed)

1/28 — Terror (Later in the show, Sen. Sessions is interviewed and the immigration fight is discussed at some length)

2/4 — ISIS (Immigration by Muslims mentioned later in the show by Gov. Jindal)

And just like Ann Coulter before him, Kaus is a little irritated that Fox has gone wall-to-wall with ISIS coverage at the expense of substantive immigration coverage:

I would suggest that the near-exclusive obsession with Middle Eastern terror is difficult to justify by the inherent news value of the subject, let alone its value to Fox viewers. You’d think the network would want to take a break if only for variety’s sake… This isn’t what actual coverage designed to alert and inform the opposition to Obama would look like.