Daily Kos Founder: A Sanders Win is ‘Just Not Going to Happen’

Daily Kos Founder: A Sanders Win is ‘Just Not Going to Happen’ 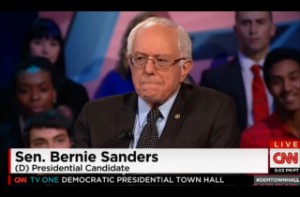 The founder of the far-left political blog Daily Kos published an op-ed in The Hill Tuesday arguing that it was time for Sen. Bernie Sanders to pack it in, and for Democrats to refocus their energy on the general election.

In the piece, entitled “Is it game over for Sanders?,” Markos Moulitsas (who publishes on his site under the handle “kos”) wrote, unequivocally, that Sanders’ “race to the White House is over.”

In short, there is no plausible route for Sanders to overcome the advantage Clinton enjoyed of 319 pledged delegates before Tuesday’s contests. Since the former first lady leads the pledged delegate race 58 percent to 42 percent, with roughly half of the delegates to take the nomination already allocated, Sanders would have to win nearly 60 percent of delegates in the remaining states just to tie her.

That’s just not going to happen.

Despite winning Idaho and Utah Tuesday night, Sanders still lags behind Clinton in the pledged delegate count 918 to 1,222. The gulf forces the Sanders campaign, Moulitsas argued, “to make dangerous suppositions about its path to victory.” Namely, their strategy hinges on superdelegates taking into account a host of factors, beyond the pledged delegate count, when making their choice, such as the candidate’s trajectory, momentum, and how well they match up in a head-to-head race against the GOP nominee.

“The Sanders campaign is now making the same argument it was decrying just a few months ago,” Moulitsas wrote, “that Democratic superdelegates should subvert the choice of the Democratic electorate to hand the nomination to the primary loser. It was an absurd argument when Clinton made it in 2008, and it’s no less absurd today. And if anyone was a beneficiary of such usurpation of the will of the voters, it certainly wouldn’t be an outsider like Sanders.”

Moulitsas’ contention is likely to put him on the outs with many members of the community of extremely liberal bloggers who contribute to his site. One recent article mocks the site’s founder’s op-ed, asserting “Moulitsas has declared the race over, and discussion is undesired at this site.” A sample of recent headlines includes“Voters get to know Bernie. Voters vote for Bernie” and “Hillary, Iraq, and Dirty Hands”; an article posted Wednesday warns ominously of a scenario in which “Clinton wins the Democratic nomination and continues to alienate Bernie Sanders’ supporters. Donald Trump is our next president.” That narrative is described as the “What if [sic] feels like reading DailyKos scenario.”