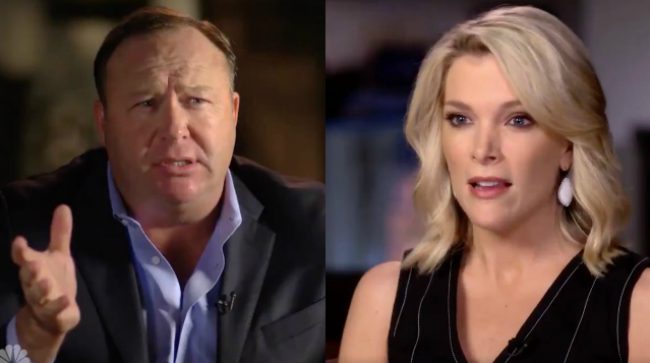 On Sunday, Megyn Kelly teased her upcoming interview with Alex Jones. Jones, the creator and chief mouthpiece of the website InfoWars has pushed a long list of fantastical conspiracy theories including claims that 9/11 was an “inside job”, the Sandy Hook massacre was staged and “animal human hybrids”

Long confined to the fringes, Jones has taken on considerable new relevance with the rise and election of Donald Trump. Trump praised the host during an interview with Jones on the campaign trail and InfoWars appears to be closing in on White House press credentials.

Twitter was overwhelmingly negative on NBC’s decision to give Jones a wider platform, and Sunday’s teaser suggests the fast talking Texan isn’t planning to give Kelly an inch.

Why is NBC airing an interview with Alex Jones? In prime time? On the network? They could pull it if there were enough complaints… https://t.co/qSunqZMvr5

In @megynkelly ‘s America, cruelty gets u on national TV on Father’s Day. #SandyHook grieving dads will go to the cemetery. #thisisnotnormal

Can’t believe @comcast is happy @NBCNews @megynkelly plan to give platform to Alex Jones and his “Sandy Hook was staged” trash. Awful.

The mother of a child murdered at #SandyHook, who is harassed by #AlexJones followers, appeals to NBC. #ShameOnNBC https://t.co/MhKPN1oFbo

Alex Jones says 20 dead kids at Sandy Hook were actors. @NBC and @megynkelly to give him a platform on FATHER’S DAY. https://t.co/Er20jmjj7C

Kelly’s goal here is to legitimize Alex Jones. The question is: why? https://t.co/kj8FBO8UrX