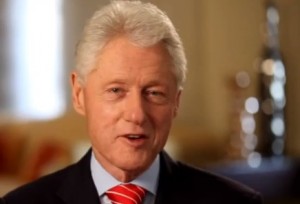 On the Biggest Debate Day Evar, President Obama‘s reelection campaign, along with the DNC, have launched an all-out assault on Republican candidate Mitt Romney‘s tax plan, with former President Bill Clinton leading the way. In a new web video from Obama For America, the former POTUS with the Mostest lays Romney’s plan out like a baby in a prizefight, making The Math come alive in a way that has eluded the campaign thus far. Along with the DNC’s spoof website and a New York Times editorial that the campaign is promoting, this looks like a preview of tonight’s title fight.

With a lot of help from a lazy media and a somnambulent first debate performance by President Obama, Mitt Romney has managed to avoid paying much of a price for the tax plan that he refuses to share, or at times, even acknowledge exists. The Math behind Romney’s tax plan has taken a series of beatings worthy of Chuck Wepner within the confines of the political media, even on Fox News, but tonight’s debate presents a chance to expose Romney’s plan in front of an immense audience. Is it an accident, then, that President Clinton’s knockout barrage runs about two minutes, the exact amount of time President Obama will have to discuss each topic at tonight’s debate?’

If there’s any weakness at all in Bubba’s presentation, it’s that is far too generous, giving Mitt Romney credit for closing some loopholes that he has said he won’t touch. The Math behind Clinton’s explanation is here, at an OFA page that also comes up if you manage to nail down that floating “Details” button on the DNC’s satirical Romney site. President Obama won’t have a chalkboard at tonight’s debate, but he could do worse than memorizing Clinton’s patter. He would also do well to practice the phrase “even Fox News,” as in “Even Fox News says the six studies you keep citing are faker than a Paul Ryan marathon.”

The Obama campaign is also pushing a New York Times editorial that blows holes in Romney’s plan citing the Joint Committee on Taxation:

Last month, the committee asked its staff what would happen if Congress repealed the biggest tax deductions and loopholes and used the new revenue to lower tax rates. The staff started adding it up: end all itemized deductions, tax capital gains and dividends as ordinary income, and tax the interest on state and local bonds, along with several other revenue-raisers.

The answer came last week: ending all those deductions would only produce enough revenue to lower tax rates by 4 percent.

Mitt Romney says he can lower tax rates by 20 percent and pay for it by ending deductions. The joint committee’s math makes it clear that that is impossible.

The Obama campaign has also been sending out mother memos attacking Romney’s math, a sure telegraph of the President’s game plan tonight. The town hall format plays to President Obama’s strengths, lending itself to the kinds of folksy attacks he uses on the stump to great effect. Even so, it’s an open question whether something that takes two minutes to explain will stick with undecided voters. The degree to which moderator Candy Crowley feels free to follow up will also be a factor. If the last two debates are any indication, though, the substance will unfortunately end up mattering very little.