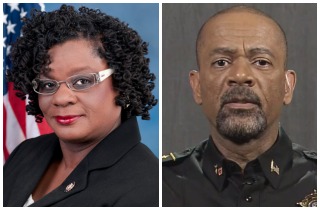 Fox News viewers are familiar with Milwaukee Sheriff David Clarke. He frequently appears on the cable channel to rip Democratic race-baiting, President Obama, the DOJ, and how, he believes, liberal policies are hurting minority communities. He even recently spoke to Congress about these issues.

Well, one House Democrat is tired of this “Fox News favorite” throwing out all sorts of “inflammatory” rhetoric. Congresswoman Gwen Moore, who represents a Wisconsin district that includes Milwaukee (which has seen a 180 percent rise in murders over last year, scolded Clarke in a piece for The Daily Beast today.

“His proclivity for provocation coupled with his distorted view of black America has grown more extreme over the years,” Moore says. “He has helped the network spread a slew of dangerous narratives that serve only to rouse the most extreme elements of the Tea Party.”

And the reason Fox likes him, she thinks, is because he can “give voice to the dog-whistle narratives its anchors dare not vocalize themselves.”

Moore’s particularly offended by Clarke’s commentary because of his position, and she really sticks the knife in at the end:

If the sheriff truly wants to help us, it’s time for him to prove that he’s more than just another partisan agitator with a badge and a cowboy hat.

The self-proclaimed “people’s sheriff” needs to drop the sideshow act and get serious. Until then, I can only wonder if Sheriff Clarke is still a lawman or just a guy who plays one on TV.