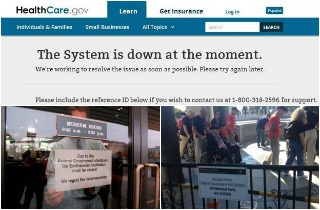 As the federal government shuts down for the first time in nearly two decades, Republicans have a resonant message to share with the American people. Democrats must now defend subsidies within the Affordable Care Act for their well-compensated staffers, an onerous medical device tax, and the reviled individual mandate. The GOP has robbed the Democrats of a winning issue, the notion that the ACA should not be wholly defunded through a budget process. The problem for the GOP is that they settled on this message late last night when a shutdown had already become unavoidable.

For the last week, the GOP’s message has been muddled. The average American is probably unable to tell you precisely what the Republican position is today and how it differs much from their position yesterday. Congressional Democrats, by contrast, have had a unified and unwavering message which is easily digested by the apolitical public: no changes to the ACA. Period.

While the polls indicate that the public is deeply mistrustful of “Obamacare,” surveys also clearly show that the public does not favor Republicans taking advantage of budgetary fights in Congress to reform aspects of the ACA. A Qunnipiac poll released on Tuesday showed approval for the GOP in Congress is nearing all-time lows, while support for Democrats is rebounding on the closely-watched generic ballot.

This government shutdown is, the conventional wisdom holds, a disaster for the GOP. The Republicans defied the will of the public, attempted to gut aspects of the ACA, and, in their failure to achieve this goal, forced an unnecessary shutdown. This may end up being how history records this moment. But there is as an alternative storyline that could generate traction during in this shutdown period.

Real Clear Politics political analyst Sean Trende published a must-read post on Tuesday which questions the narrative that this shutdown, like those of the 1990s, will ultimately benefit the Democratic president. While it may, Trende argues that the circumstances which led to this shutdown are markedly different from those of 1995 – 1996. In short, the issue which forced a shutdown in 2013 – the deeply unpopular health care reform law – is far more solid political ground for the GOP than the shutdowns of the past.

With this in mind, Democrats must be hoping that the public is relatively unclear on the details of why the government was forced into a shutdown. Even a vague knowledge of why the GOP steered the government into this cul-de-sac might warm the public to the Republican cause. Democrats must be even more fearful, then, of the “Obamacare” health insurance exchanges rollout.

“Of the 14 states and Washington D.C. that have their own exchanges, only four — Massachusetts, Rhode Island, Colorado and Washington, D.C. — appeared to be up and ready for business between 9:30 and 10:30 a.m.,” Bloomberg reported.

“Obamacare Exchanges Not Working As Planned,” blared a headline from the Associated Press.

Even MSNBC, an unlikely source to be sure, featured an anchor attempting to demonstrate how the exchanges work in a prerecorded package report. The anchor became so frustrated with the process that she simply gave up.

All this suggests to the marginally tuned-in voter that the GOP might have been onto something with their last minute efforts to derail the ACA. Presuming the Republicans in Congress do not undermine their own message – an effort which POLITICO reports is well underway – the GOP may find a way out of the corner that they have painted themselves into.

As the Obamacare rollout lives up to what many suspected would be an imperfect implementation period, Republicans who forced a government shutdown may be partially vindicated.