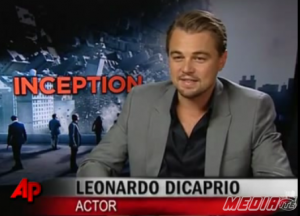 The cast of Christopher Nolan’s just-released blockbuster Inception gave some surprisingly political answers to questions at a press junket recently. While promoting the mind-bending action film which posits many interesting ideas like shared dreams, stealing ideas from people’s subconscious, and how having your mind haunted by a sexy French woman isn’t always a good thing, the cast was asked whose dreams they would like to infiltrate. Cue the Sarah Palin bashing.

Now, before all of you Palin fans get out your “Hollyweird” pitchforks, I think the actors should at least be commended for giving thoughtful answers to such a stupid question when they probably just want to start screaming, “Oh my God, who cares whose dreams we’d want to go in?! I’ve been sitting in this stupid press junket chair for eight hours! Just go see my movie, it’s got pretty special effects in it! I promise!” And, besides, their answers do inspire us to imagine what kind of dreams those three public figures would have. I imagine Hayward’s would probably involve a bunch of people calmly telling him, “Don’t worry, we never liked the Gulf of Mexico that much anyway,” while Palin’s presumably features her flying around on a helicopter and hunting Katie Couric, Dave Letterman, and her future son-in-law from above.

As for Cheney’s dreams, I don’t even want to imagine. Mostly because I think they’d be creepy, but also because Phillip K. Dick already asked the most relevant question 40 years ago.