Did The White House Just Put a Death Clock on Bernie Sanders Campaign? 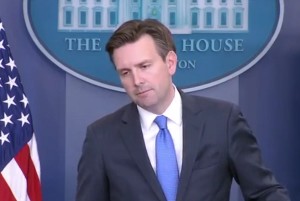 Amid heightened speculation that an endorsement of former Secretary of State and Democratic presidential frontrunner Hillary Clinton by President Obama could happen as soon as this week, White House reporters took turns trying to shake something loose from Press Secretary Josh Earnest at Monday’s daily briefing. For those adept at reading between the lines, Earnest appeared to signal that the President may no longer feel the need to choose between Hillary Clinton and challenger Bernie Sanders in another 48 hours.

Earnest repeatedly referred reporters to the President’s remarks at a town hall last week, in which he said “I think we’ll probably have a pretty good sense next week of who the nominee will end up being” after votes are cast in this Tuesday’s primaries in large states like New Jersey and California. When CBS News correspondent Mark Knoller asked if the President would still endorse Hilary of Sanders doesn’t drop out before the convention, Earnest appeared to put a clock on the White House’s recognition of a winner:

The President was pretty clear that once the voters in New Jersey and California have had the chance to express their preference as to who should represent the Democratic Party in a general election, then we may be in a position where we have a much greater sense of what the outcome is likely to be. But until then, we’ll wait another 48 hours to see how this plays out until we get too deep into the hypotheticals.