Did You Know There’s a Dem Debate Tonight? No, Because Debbie Doesn’t Want You To 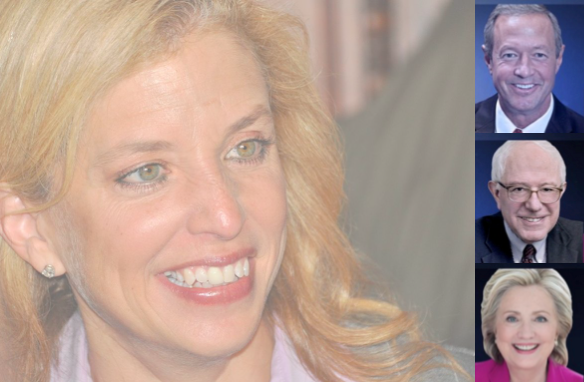 As part of my commission here at Mediaite, I posted the entire 2016 debate schedule onto a white board firmly fixed to the wall behind my desk. Just the basic info — TV networks, announced dates, city locations, etc., a nice one-stop reference of the dates to keep in mind. I’ve even colored in the Democratic events in blue marker, and red for all GOP events too.

I was struck by the Democratic debate schedule when I first wrote it up; not only are there only six entries onto the board (seven if you include Rachel Maddow’s non-competitive cakewalk last week), but because outside of last month’s CNN Debate on a Tuesday, the announced dates of all the others are awfully scheduled weekend slots.

During a week when the news headlines have been dominated by the Fox Business debate in Milwaukee, it’s safe to assume that almost no one knows that the Democrats are debating tomorrow night as well. On a Saturday. At 9 p.m. Competing with the Oklahoma-Baylor game on ABC, one of the most highly anticipated games of the college football season.

DNC Chair Debbie Wasserman Schultz has made it her absolute mission to stifle the Democratic primary debates, to bury them underneath faintly-advertised headlines and shoehorn them into impossibly unrealistic time slots. Let’s be honest — Wasserman Schultz has no interest in putting on a show of the primaries.

After tomorrow, the next two Democrat square-offs are:

Saturday, December 19th on ABC News in Manchester, N.H. It’s the Saturday before Christmas; if total viewership is less than 5 million I would not be surprised. The debate is almost certainly going to get buried beneath the NBA and NHL seasons, which both historically see sharp spikes in viewership during the holidays. It’s also the time of the year that the NFL will occasionally schedule Saturday games, and the night of the 19th features a Jets-Cowboys matchup on NFL Network that could have playoff implications for at least the Jets.

Sunday, January 17th on PBS in Charleston, S.C. Aside from millions of Americans who will ask in unison, “What channel is PBS?” — the 17th is the divisional round of the AFC playoffs. Let’s see — a Clinton vs. Sanders debate on taxes and foreign policy or a Patriots vs. Bengals game in icy Foxborough? I predict that viewership for that game will trounce that of the debate 10-to-1.

Wasserman Schultz has long been accused of limiting the number of debates — and now the visibility of those debates — to aid in the perceived coronation for Hillary Clinton. The fewer the opportunities that Bernie Sanders has to knock Clinton from her pedestal of presumed victory, DWS’ close friend Clinton ensures her nomination and avoids a gaffe that would put the ’08 slide to shame.

There is also another hypothesis behind the masked scheduling of the Democratic debates, one that allows for the Republicans and their never-ending media circus to wear on the patience of the general electorate. Voters will inevitably grow weary of stabbing stories, soundbites of lawlessness, and 95-minute tirades, won’t they? There, standing on Reasonableness Island, will be the presumed Democratic frontrunner and his or her path to the White House (of course, if DWS has her way, the sentence will read “her path”).

The truth may lie somewhere in the middle of these two extremes, but Wasserman Schultz’s inability to give straight answers has increasingly disgruntled the Democratic base. She has faced barrages from voters calling on everything from more debates to her resignation, even earning an on-stage rebuke from Martin O’Malley to the cheers of a crowd intent on letting their frustration be known. The fewer shots fired at the Clinton throne, or in this case the less that those shots are seen by a viewing audience, means that the whiteboard on my wall will stay disproportionately colored in red marker.