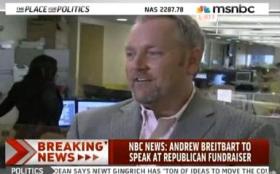 The day after the Shirley Sherrod story broke 45 days ago, Andrew Breitbart was on every cable news network (and many other outlets) talking about the edited out-of-context video and subsequent overreaction from the government.

But since that day, Breitbart, a media presence on the rise, has been absent from cable news. Did the Sherrod story damage his personal brand?

Fox News and MSNBC did not respond to requests for comment about the story, and CNN tells us there is “no directive” not to book Breitbart. He was only rarely on CNN and MSNBC before the story broke, but he did occasionally show up.

We reached out to Breitbart as well to see if his cable news silence was self-imposed, a way to get out of the spotlight until he was ready to return with new ammunition, but he did not respond to requests for comment.

The name “Breitbart” certainly hasn’t disappeared from the cable news airwaves in the last month-and-half. Every network has mentioned the new media star more than a dozen times. And he’s still around on Twitter – although significantly less than he was before the Sherrod story. But the notable absence from cable news seems to indicate the Obama administration and USDA weren’t the only ones hurt by the story.

Breitbart himself has taken a new, more sudued role, in the aftermath so far.