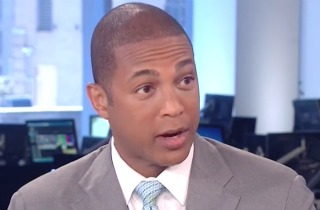 Don Lemon took to Black America Web today with an opinion piece that is sure to rile up members of Donald Trump‘s fan base.

Since Trump has begun drudging up the extramarital issues of former president Bill Clinton and Democratic frontrunner Hillary Clinton, the fight for the presidency has turned sort of ugly. He called her an enabler, which did not sit well with the Clinton camp and apparently didn’t sit well with Lemon, either.

He pointed to the latest New York Times op-ed from Charles M. Blow, titled, “The Ghosts of Old Sex Scandals,” as a way to back up his assertion that blaming the candidate for her husband’s actions is ridiculous. Here’s Lemon:

Blow reminds us that several people, many of whom are Republican leaders, who railed against Clinton now and then admitted to having extra-marital affairs/sexual relationships as well.

You may say, and rightfully so, that they are not running for President.

And you’d be right.

But neither is Bill Clinton.

He went on to point out that Trump, too, has cheated on wives in the past. He posed the question, “[I]f Hillary Clinton was an enabler, shouldn’t you be asking the same of Newt Gingrich’s wife or Henry Hyde’s wife or Dan Burton’s wife or David Vitter’s  wife or Donald Trump’s wife or any other wife who’s husband has cheated on her?”

The question, of course, has been asked before. Notably, Joy Behar wondered the same thing only two weeks ago.

So, what do you think? Do you agree with Lemon and Behar? Should we not judge the candidates based on the actions (or inactions) of their spouses? What is fair?