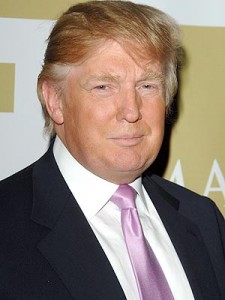 Today, Laura Ingraham had possible presidential candidate Donald Trump on her radio show, where the mogul and media personality was extremely open about his political views on a number of touchy subjects, like abortion and immigration.

Ingraham played Trump a couple clips of Jeb Bush and George W. Bush each discussing immigration and “nativism” (her new favorite topic of discussion, apparently), and seemed to want to color the brothers Bush’s talking points as being about “people like you (Trump).”

Trump bemoaned the U.S.’s lack of a firm stance on immigration and its relationship with China, telling Ingraham that “it almost seems like we’re becoming amorphous. It’s, like, do we have a country or not?” He added that, were he president, he would “announce, without equivocation, a 25% tax increase on anything purchased from China.”

He also made known his views on the Department of Education (In a nutshell: Do away with it, put education in the hands of local, state government) and abortion, much to Ingraham’s surprise:

Laura: “I’m hoping that you are going to seriously consider getting into the race, I mean you and I disagree on some social issues. I could have you on for an hour I just want to download everything that you think.”

Trump: “I know I would love to be on any time you want, but what social issues do we disagree on?”

In his 2000 book, The America We Deserve, Trump wrote: “I support a woman’s right to choose, but I am uncomfortable with the procedures.”

Take a listen to the interview, via The Laura Ingraham Show: