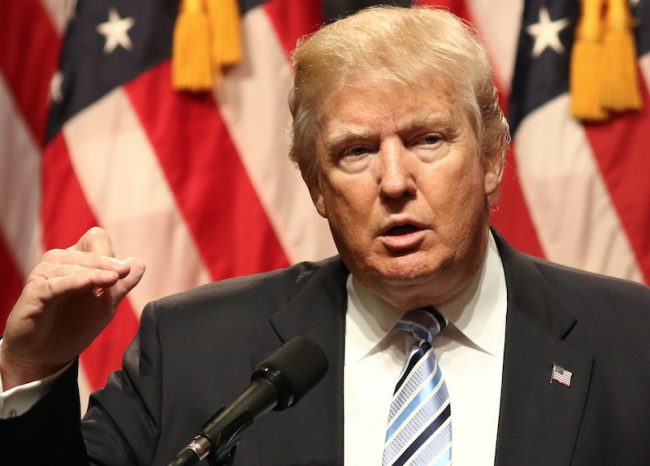 In the glow of South Florida, President Trump kissed the ring of wealthy GOP donors Friday night, pleading with them to inject the RNC with enough cash to win a 60-seat, fillibuster-proof Senate majority.

“I need you guys to step up and overwhelm them,” Trump said at the RNC’s spring retreat, according to POLITICO.

So, essentially, Trump, who successfully railed against Jeb Bush, Hillary Clinton, and the rest of the political puppets who work for their donors instead of the American people, is, in fact, the puppet master.

I’d say this would be a telling revelation if it wasn’t so predictable.

A billionaire, gift-wrapped a million-dollar loan from his daddy, making billions off of his bravado and salesmanship (and later his name), promising the fine blue-collar working people of the Midwest that he will be the savior they’ve been waiting for.

It was a fantasy Trump expertly conjured up. And aided by the pathetically weak Democratic Party and fellow plutocrat Clinton, Trump successfully hoodwinked millions.

I saw it up close, having covered dozens of Trump rallies across the country during the campaign. It was a real troubling picture: seeing the real economic pain and suffering of so many of Trump supporters, and knowing that they were being sold a bill of goods from a fake populist, selling them on being different since he didn’t need the donor classes money.

The inherent contradiction? Trump made a fortune from screwing over working class people and taking the cheapest route possible. Of course he needs their money!

Yet, Trump continues to hoodwink the millions of Americans who voted for him because he’s able to craft masterful, Joe-Six-Pack language that makes them think he’s fighting for them as the evil millionaires and moneyed class try to keep them down.

I don’t blame the people who’ve been tricked by the president’s master salesmanship. These are people that have been screwed over and left out to dry by the bought-off politicians ‘representing’ them for decades. Their anger and desperation for help brought them to such desperate depths, they believed a reality-TV-star-plutocrat was the answer to their economic ills.

Unfortunately, they’re in for a rude awakening.

Already, Trump has taken a machete to working people. Within an hour of his presidency, he suspended a scheduled cut in mortgage insurance premiums, raising costs for middle-class borrowers by $500. When Trump mentioned the “forgotten men and women” during his election night victory speech, he must have been talking about bank and mortgage executives.

Trump also sold out working people’s air and water, approving the dangerous KeystoneXL and Dakota Access Pipelines under the guise of them both creating thousands of jobs. This is demonstrably false, but Trump gets away with lying because the media would rather obsess over his tweets and how “presidential he sounds” in a speech rather than report on lies. (Maybe the advertisements they run from big oil play a part?)

The president is also backing off his pledge that pipelines must be made with U.S. steel, allowing KeystoneXL to be made using foreign steel. Why? Because he and his GOP colleagues’ big donors don’t want to pay extra for American-made steel!

Trump, borrowing from George W. Bush’s tax-cuts-for-plutocrats-masked-as-relief-for-the-average Joe, also spoke about upcoming unprecedented middle class tax relief during his Joint Address to Congress. But tax analysts have exposed this as a trickle-down con-job on steroids: Trump’s plan will add 10-12 trillion to the national debt while hoarding money to millionaires and billionaires.

And crumbs to working people (and in some cases, tax increases).

Yet millions of middle class people hear Trump’s tough talk on bringing back jobs from evil Mexico and China, and they’re sold. And for some icing on the Trump cake, he also stepped in to help the same big pharmaceutical companies he previously said “were getting away with murder.” As International Business Times reported, Trump stepped in to stop big pharma shareholders’ initiatives to add more scrutiny around skyrocketing drug prices.

Trump: Man of the people.

Don’t get me wrong — establishment, bought-off Democrats haven’t exactly been the champions of working people either. That’s why they just lost to a reality TV clown. But what’s remarkable about Trump’s hoodwinking of America is the fact that lies no longer seem to resonate with a huge swath of the country.The president can be clearly lying about numbers and facts, but it doesn’t seem to matter to his supporters.

A big reason for this is that they have no clue they’re being lied to. Fox News acts as Trump’s right arm, and CNN and MSNBC are so busy riding the ratings’ wave of Trump’s antics, they don’t focus on that pesky notion of correcting falsehoods and challenging bullshit. Then there’s The New York Times, Washington Post, and rest of the legacy media, fixating on Russia and red-baiting, which further feeds into Trump supporters’ conservative victimization complex. No wonder The Young Turks and independent media are thriving like never before.

Until the media comes together to stop bending over backwards to appear ‘neutral’ and unbiased toward a serial liar and xenophobe, Trump will continue, as he himself dubbed it, “getting away with murder.”

And millions of working people who supported him will continue to buy into the fairy tale of Donald Trump: Man of the people.

(Which is a HUUUUUUGE lie.)