Don’t Attack Nazis, and Don’t Praise Those Who Do
Opinion

Don’t Attack Nazis, and Don’t Praise Those Who Do 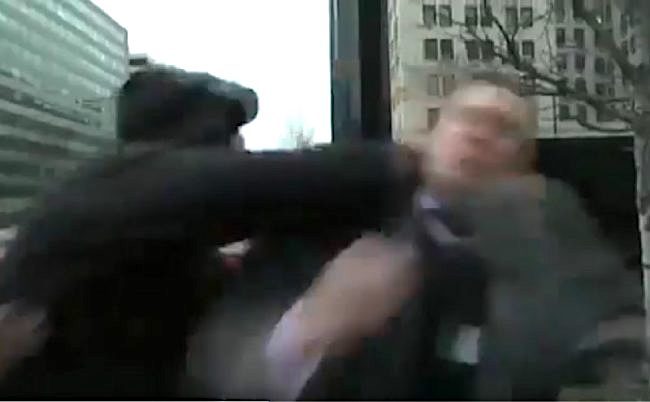 I can’t believe I have to write this column.

For those who missed it, white supremacist Richard Spencer was punched in the face Friday while counter-protesting at Trump’s inauguration. This resulted in much jubilation, so much so that The New York Times ran a piece openly questioning if it was okay to punch Nazis. Here’s a former top Obama staffer seemingly agreeing that it was.

I don’t care how many different songs you set Richard Spencer being punched to, I’ll laugh at every one.

Did I personally enjoy watching Spencer get hurt? Yes, just like I get perverse amusement from cop killers showing up in court with black eyes after they “resisted arrest,” child abusers getting abused in prison– heck, even just people slipping on the ice and eating it. I am a man, and man is a sinful, violent animal with urges unconducive to civil society. That includes delighting in the pain of others, especially those I consider beneath me.

But a central tenant of civilization itself is that these evil urges are best suppressed by a set of legal and moral imperatives. For hundreds of years, American society has proudly embraced the conceit that other citizens can say things that shock us, disgust us, infuriate us, even say things that we believe are fundamentally dangerous, but we will not retaliate outside of the law. Crazier yet, those who most strongly believe in democracy have often gone out of their way to defend the rights of those who would dismantle it, having faith in the strength of their fellow citizens’ convictions to prevent the unthinkable. Spencer had every right to spout his beliefs unmolested, no matter how evil or sick.

I made a miscalculation earlier today. I suspected that many of the people cheering Spencer’s attack did so innocently, and by minimizing the assault– that is, they think that’s okay to hit him but not go much further than that. I made a pretty simple point on Twitter: even a single punch can disable or kill a man, and therefore Spencer’s attacker conceivably could have killed him.

The tweet took off, and not in a good way. Literally hundreds of people responded, all saying that they would have loved if the attacker had killed Spencer. Some went further, calling for the extrajudicial killing of all Nazis.

Should’ve hit him with a bat instead, tbh! https://t.co/fdVNsYKu9m

I wonder how many people wished it would have? *raises hand* kill all Nazis. https://t.co/Qz82I7y7ae

I honestly don’t have room for all the responses along these lines. These are also the polite responses, not the ones calling me a Nazi or calling for my death.

It was an eye-opening reaction. The reason I penned the tweet was because I thought the liberal consensus that serves as the bedrock of the American society was intact. I had this whole spiel planned about how if we as a society endorse violence against one Nazi, we’re responsible if it leads to worse violence, maybe even murder, where do you draw the line, blah blah blah. I thought it was more or less self-evident that you don’t murder people on the street for expressing views you don’t like. I thought we were all the same page, and I was wrong.

What was most depressing is that the pro-violence responses came almost uniformly from liberals. I suppose that isn’t that shocking: 51% of modern Democrats believe the government should ban hateful speech entirely. The more intelligent responses phrased it this way: Nazis are so violent, so dangerous, so outside the mainstream, they don’t deserve the usual protections afforded to political speech, including protection from violence. Still, it is sad to see so many liberal Americans abandoning one of the founding suppositions of liberalism at the dawn of an administration where it will be more necessary than ever before.

Even if you buy the lesser notion that Nazis deserved to be punched in the face, who decides who the Nazis are? Spencer swears up and down that he’s not a Nazi. That’s obviously a questionable claim. But the number of people in American politics who are called Nazis or racists and protest that they aren’t is… well, everyone at this point.

Going by many people’s judgment, Donald Trump is a Nazi. Before he was a Nazi, Obama and Bush were the Nazis, Reagan was a Nazi, William F. Buckley was a crypto-fascist as I recall. Today, dozens of people have called me a Nazi. And if we’re talking about ideologies that led to the murder of millions in general: Obama was also supposedly a communist, as were Bill and Hillary Clinton, as was Bernie Sanders. Going by death toll we ought to punch communists twice as hard as Nazis, right?

I made a similar point when The New York Daily News openly praised the assassination of an ambassador last month. The moment violence against “Nazis” becomes an acceptable response to discourse, everyone becomes a Nazi. How many times have you seen conservatives denounce liberals as “the real racists,” or alt-right Pepe accounts with “white genocide” in their Twitter handle? In their minds, normal political discourse is Nazism.

Now it doesn’t matter whether Spencer is a “Nazi,” per se; he’s still a racist man. Among criticisms of Spencer’s white supremacist website are that it is “a notoriously racist publication… reminiscent of early Nazi propaganda with anti-Semitic illustrations of Jewish people.” It “has motivated others to participate in hate crimes against Muslims.” It caters to “already angry people who are trembling with xenophobia and paranoid discomfort that immigrants are coming to take over their way of life.”

Given all the above, is it okay to attack Spencer? Kill, even? Would you say he was asking for it?

Those raising your hands: what if I told you all the above quotes were actually criticisms of Charlie Hebdo?

The man who punched Spencer took the law into his own hands and appears to have unilaterally declared he was too dangerous to be allowed to speak. If we praise that man, we teach others to do the same so long as there are enough people to declare them heroes on social media. That includes the alt-right, that includes Islamists, that includes anyone with an ax to grind in today’s hyperpartisan world. Wherever words have no effect, fists and baseball bats will become the substitute.

Embrace this man, renounce the classical liberal understanding of free speech, and you light a fuse. Don’t act surprised when it blows up in your own face.