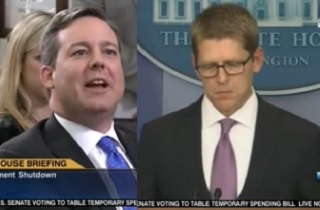 With a possible government shutdown hours away, and a showdown over the debt ceiling weeks away, President Obama has steadfastly refused to negotiate with Republicans over defunding or delaying the Affordable Care Act. At Monday’s White House briefing, Fox News’ Ed Henry asked Press Secretary Jay Carney why the President will talk to the Iranian President, but not Republicans, and Carney accused Henry of deploying a “GOP talking point.”

“You do not know whether Iran will follow through on his promises,” Henry said, “but the president called the President of Iran on Friday and opened up diplomatic negotiations, so why not House Republicans?”

“Thank you for the reassertion of GOP talking points,” Carney said, as Henry protested.

“No, sorry,” Henry replied. “Why don’t you at least talk to them? Even if they’re wrong.

“Can I remind you it was the Speaker of the House, in several venues, who said he would never negotiate with the President again?” Carney cut in.

“So call him out,” Henry interrupted. “Call him out, bring him over here, force him to talk.”

“Maybe you did not catch up to what the President just said, but he said he would be talking to leaders of Congress,” Carney replied.

“Then why isn’t there a meeting today?” Henry asked.

“I have nothing new to report on the president’s schedule,” Carney replied, “but the House of Representatives could have in the past, a few days ago, and could have today very easily avoided shutting down the government by passing a government for several weeks, extend funding of the government into the future, allowing for further negotiation about our budget priorities. You know. Fox has reported this.”

Carney reiterated the President’s willingness to negotiate in the course of regular order, and even to negotiate on the CR over improvements to Obamacare, but as nearly every other reporter asked as well, will not negotiate on defunding or delaying the law. “The [Republican] objective is now focused entirely on trying to prevent the implementation of a law that Congress signed into law, that was upheld by the Supreme Court of the United States, and validated across the nation in a presidential election,” Carney concluded.