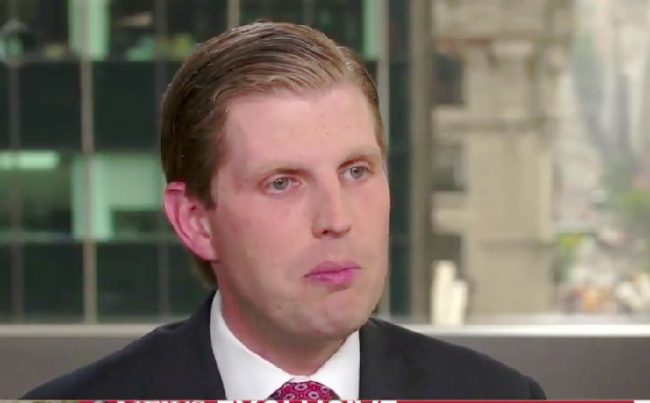 Now, it is no secret that Fox & Friends is one of President Donald Trump’s favorite cable news programs. Due to the friendly way the show has covered his presidency, Trump has granted them exclusive interviews and promoted F&F segments on his Twitter account.

So I guess it shouldn’t be too surprising that one of the show’s hosts would take to Twitter to offer up personal praise for the president and his family. This morning, co-host Brian Kilmeade replied to a tweet from a fan of the president’s who asked to retweet if “you stand behind” Trump and his “wonderful family.” Kilmeade’s response: “Great family great people.”

RETWEET if you stand behind @POTUS @realDonaldTrump and he's wonderful family. pic.twitter.com/SZ1yC0vdGV

And this did not go unnoticed by the Trump family. The president’s son Eric quickly responded to Kilmeade to thank him:

Eric Trump appeared on Fox & Friends last week and agreed with Kilmeade that the media is suffering from “Trump Derangement Syndrome,” claiming they don’t cover all of the great economic achievements made by his father.