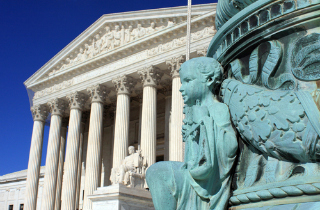 The Supreme Court is expected Monday morning to hand down its decision on the so-called Hobby Lobby case, the most serious challenge to the Affordable Care Act since the law itself was up for review almost two years ago. At stake is whether corporations can claim a religious exemption to opt out Obamacare’s “contraception mandate,” a ruling that could have wide-ranging implications for the intersection of religion, businesses, employees, and health care.

The Affordable Care Act classifies new aspects of health care, including birth control, as preventative services, thus requiring even basic insurance plans to cover them with no copay. Hobby Lobby, the largest of the 100 businesses seeking a religion exemption from this so-called contraception mandate, claims the requirement to provide health plans that cover certain types of birth control violates their religious beliefs that life begins at conception. The company argues that it is forced to either provide means of obtaining the services, pay a prohibitively large fine, or sell its company.

“The government is forcing us to choose between following our faith and following the law,” Hobby Lobby CEO David Green, a devout Southern Baptist, has said. “I say that’s a choice no American and no American business should have to make.” (A second and similar case has been filed by Conestoga Wood Specialties, a smaller company owned by Mennonites.)

The most relevant precedent for the case is Employment Division v. Smith, a 1990 decision in which the Supreme Court ruled in favor of the state of Washington when it denied unemployment benefits to two Native American men let go after ingesting peyote, which was illegal. The Court did not buy the men’s religious objections. “To permit this would be to make the professed doctrines of religious belief superior to the law of the land, and in effect to permit every citizen to become a law unto himself,” noted liberal Antonin Scalia wrote for the majority.

However, since and partially in response to Smith, Congress has passed the Religious Freedom Restoration Act, which requires that the government show that a law in question does not “substantially burden” a person’s religious beliefs. Hobby Lobby is arguing for an exemption under the RFRA, not the First Amendment.

The first question, then, is does the so-called contraception mandate pose a substantial burden on Hobby Lobby’s exercise of religion? This is immediately tricky, as Hobby Lobby is not providing the birth control itself or even paying for the service itself, but merely providing plans that allow employees to purchase it. Via Scott Lemieux:

The mandate does not require anyone to use contraception or promote contraception—if that burden is “substantial,” then the word has no meaning. Essentially, any regulation could be subject to constitutional challenge given a bare assertion of a religious conflict.

But the substantial burden is somewhat in the eye of the religious beholder, not the secular government, argues Eugene Volokh:

[snip] The Hobby Lobby owners drew a line: Providing health insurance — including through their closely held corporation — that covers what they see as tools for homicide is sinful complicity with sin. Providing salaries that employees may use to buy the same tools, or hiring employees who use those tools, is not.

One of the substantial burden arguments questions the very idea of a contraception “mandate,” as Hobby Lobby is not forced to purchase the plans. Lemieux again:

There is no contraception “mandate.” Hobby Lobby is not legally required to compensate its employees with health insurance at all. The regulations imposed by the ACA are on insurance plans, not on the corporations per se. What is erroneously described as a “mandate” simply means that if corporations choose to take advantage of the tax benefits for compensating employees in health insurance rather than wages, the insurance has to meet minimum coverage standards. As is often the case with specious religious freedom arguments, the corporation wants it both ways, to get the tax benefits without providing the full benefits to employees.

As the SCOTUSBlog’s indispensable Lyle Denniston puts it, the case raises

the profound cultural question of whether a private, profit-making business organized as a corporation can “exercise” religion and, if it can, how far that is protected from government interference…In a manner of speaking, these issues pose the question — a topic of energetic debate in current American political and social discourse — of whether corporations are ‘people.’

Aside from whether corporations do have any religious rights, as such, the cases also raise the question whether the religious rights of their owners — real people, who undeniably can act according to their faith — are violated by the requirement that their companies obey the contraceptive mandate. Ordinarily, in business law, corporations are separate from their owners, but the owners in these cases resist that notion, at least so far as the owners’ religious views actually shape the business of their companies.

If Hobby Lobby is a religious entity, can it claim cashiers are ministers and not comply w/ anti-discrimination laws? http://t.co/BOPLpM6Tgh

On the other hand, corporations do comprise people, and in the case of closely-held corporations embody and express the owners’ values. Via the Federalist:

As with speech rights, individuals do not give up their religious rights when they incorporate, for whatever purpose. In the Hobby Lobby case, where the organization’s mission statement explicitly included a charge to operate in accord with the owners’ religious faith, there can be no question that the corporation was intended to further the “quintessentially human activity” of religious behavior. It is astonishing that leftists cannot grasp the simple truth: corporations are made up of people.

Citizens United has frequently been invoked as precedent for a corporation’s First Amendment rights:

Jeff Mateer, senior counsel at the conservative Liberty Institute, said the question of a corporation’s religious rights is not a tough one. “If the court determines that they do not have that right, it’s really going to change 200 years of legal precedent where we have assumed that corporations do have First Amendment rights,” he said. He pointed to the Supreme Court’s 2010 decision in the Citizens United campaign finance case, in which the justices overturned bans on corporate political spending as a violation of freedom of speech.

Also potentially in question is whether Hobby Lobby is substantively different from the third party religious organizations (like religious hospitals) exempted from the mandate. Hobby Lobby is explicitly making this argument:

To begin with, they say, Congress did not explicitly exclude businesses from coverage when it passed the statute in 1993. Indeed, the statute claims to cover “persons,” a word courts usually interpret to include nonprofit and for-profit entities as well as individuals. Furthermore, the two companies contend, there is no reason to exclude for-profit businesses from RFRA’s coverage. No one disputes that RFRA covers nonprofit entities, such as a religiously affiliated private school, so why, they ask, should such coverage disappear for a for-profit organization simply because it operates under a different tax structure?

The Consequences of the Potential Decisions

A ruling against Hobby Lobby would end all religious exemption-based challenges to the Affordable Care Act. Meanwhile, the consequences of a decision in favor of Hobby Lobby would be far-reaching. Via the shifty ne’er-do-wells at PEW:

If the court rules in favor of Hobby Lobby and Conestoga, the decision would likely open the door for businesses to invoke RFRA in a wide range of challenges to federal statutes and regulations. For instance, one bill now pending in Congress that would almost certainly invite such challenges is the Employment Non-Discrimination Act, which would include sexual orientation among the protected characteristics in workplace discrimination cases. A decision in favor of Hobby Lobby and Conestoga might give for-profit employers a strong foundation to raise religious objections to hiring gays and lesbians or to providing the same-sex spouses of employees with the same benefits extended to opposite-sex spouses.

As Adam Liptak pointed out in the New York Times, the Obama administration is cautioning against the “door’s open” effect such a ruling could have. “Solicitor General Donald B. Verrilli Jr. warned the justices that a broad decision striking down the contraception provision could imperil minimum wage and overtime laws, Social Security taxes and vaccination requirements, all of which have been subject to religious challenges in earlier cases,” Liptak wrote.

Amanda Marcotte sees a decision in favor of Hobby Lobby as undermining the entirety of workplace law:

The argument should alarm anyone who has a boss and works for money. After all, your health care plan belongs to you, as your paycheck does. You worked for it and your boss transfers it to you, along with your other benefits and paycheck, as compensation for your work. Hobby Lobby is arguing that even though they signed the plan over to you, they feel they should control how you use your own plan or else your private choices violate their “liberty.” If Hobby Lobby wins, it could open the door to all sorts of alarming infringements on an employee’s right to privacy and religious freedom, by giving their employers a vote in how they use their compensation packages they earned by working.

How’s the Court Going to Rule?

The libertarian Cato Institute suggested in a supporting brief that because these two companies are controlled by their owners, the Court could rule in their favor without setting a broader precedent that corporations in general can practice religion.

Such a ruling wouldn’t be precisely down the middle—it would open up more exemptions to the contraception mandate, and the Justice Department is adamant that corporations and their stockholders must remain separate legal entities. But it could be a way to skirt the outcome liberals fear most—a broad and explicit expansion of corporate personhood—if the Court’s conservative majority appears to be leaning against the birth-control mandate.

The problem in anticipating a victory for religious owners, though, is that the focus in that analysis may fall too heavily on the owner’s interests, and insufficiently on the interests of the employees. What is at stake on that side of the legal controversy is the interest of female employees in managing their personal lives and their reproductive health, with obvious implications for their ability to carry on their work lives and careers.

This would be a good time to remember that a) reading the oral arguments tea leaves is notoriously tricky and can produce an inaccurate assessment of how the justices will rule; and b) after oral arguments against the original constitutional challenge to the ACA, everybody thought the individual mandate was doomed. It wasn’t.

[Editor’s note: This post has been republished from an earlier date.]