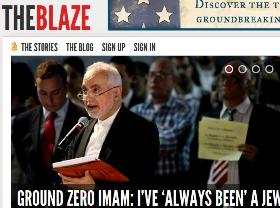 Having conquered TV, radio, book publishing and now live events, Glenn Beck is looking to expand his media empire into a new arena – the web (obviously GlennBeck.com is thriving too).

Mediaite has the exclusive details about a news and opinion website Beck is launching tonight. Here’s what to expect.

Beck’s new site is called TheBlaze.com, and will be edited by Scott Baker, formerly of Breitbart TV and host of “The B-Cast”. In an exclusive statement, he tells Mediaite:

Our hope is that everyone who comes to The Blaze finds original reporting, insightful opinions and engaging videos about the stories that matter most. We are excited to launch and I look forward to keeping Scott and his team busy by sending countless ideas at 3am every morning.

We talked to Baker today about what readers can expect from the new site, the team behind it and more. “It’ll be news and information,” he told Mediaite. “Some commentary and opinion stories we’re interested in that are being under-covered or not covered.”

People will inevitably make the comparison to Arianna Huffington – whether Beck’s role as figurehead behind the site will make The Blaze into a conservative Huffington Post. “The one thing pretty clear around Mercury [Beck’s company] is that Glenn is not short on ideas or hesitant on input,” Baker said. “His input is already evident in how the site looks, and that’s what will continue. It will be a continual flow of tips and suggestions and encouragement.”

The “small scrappy staff” behind The Blaze include Baker as well as Jon Seidl, formerly of the Manhattan Institute and American Spectator, and Meredith Jessup, formerly of Town Hall. Also, Pam Key of Naked Emperor News will contribute as a video editor. Baker moved over to Mercury at the beginning of June and began shaping the site. He will continue hosting “The B-Cast” the daily web show, with Liz Stephans.

Baker says there “seemed to be a lot of synergy” between what Beck was doing and what he did at The B-Cast. But now Baker is working with another conservative media mogul – he worked with Andrew Breitbart in his last role. “Obviously I worked with Andrew for a long time and have great respect for him and his sites and what he’s doing,” said Baker. “They emphasize different things. Also Glenn is a broadcaster and my background for 20 years was in broadcasting. There’s a shared sensibility from that end.”

Baker recently experienced the Beck influence first-hand – down in D.C. at the Restoring Honor rally, which he called an “extraordinarily remarkable event.”

Ultimately, like any site launch (I remember ours just 15 months ago), the true test will come in the weeks and months as the audience gets used to coming on a regular basis and the tone and style take shape. “We’re going to be what we are, and others will judge what we’re like,” said Baker.

If it’s like past Beck media ventures, it’s probably headed for major success.