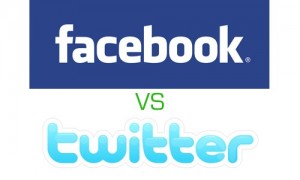 TechCrunch reports that “Facebook grew twice as fast as Twitter in July;”  To back this up, they produce an official-looking Comcast chart which documents Facebook’s impressive climb (below). The story was quickly picked up by The Washington Post and HuffPo among others, but did anyone stop to consider the premise that it makes sense to compare Facebook and Twitter at all?

TechCrunch shrewdly addresses some of the predictable nitpicks (i.e. a lot of people access Twitter through clients like Tweetdeck or Seismic), and surmises that the reason for Facebook’s growth is the introduction of the “Everyone Button,” which lets people broadcast status updates and the like to a broader audience than their group of friends.

But they evade the biggest question of all: is it fair to compare Facebook and Twitter? The two are social media properties, but they serve wildly different functions. Facebook is a full-fledged social network. Even with its new, microbloggy search features, the “Facebook friend” is still the concept central to the service — people use Facebook to keep up with their friends, broadly defined. Twitter, by contrast, is a deliberately bare-bones platform. Direct messages and profiles exist, but the focus remains on the feed of information. Moreover, a unique visitor on Facebook has a very different value than a unique visitor on Twitter for the simple reason that Facebook monetizes its traffic through advertising and Twitter does not.

This isn’t to single TechCrunch out: CNET, Silicon Alley Insider, and Business Week have all hyped the “Facebook vs. Twitter” storyline.

In other news, apple.com continues to dominate orange.com in monthly traffic.